Monetary Incentives by Government May be Reason for Poor Quality Corneas

Eye donation has become popular in India over the last couple of decades, thanks to the awareness created by celebrities like Aishwarya Rai and the work of many NGO's in the field. The credit of this success, in the end, also greatly rests on the society's noble attitude to eye donation.

However, data from the Ministry is somewhat alarming. It shows that as many as 51,354 eyes were donated in 2013-14, but only 22,384 were used for transplantation. The figures for utilization have remained more or less the same over the past few years with only 50% of the donated eyes getting utilized.


Medindia, in an exclusive, investigated the reason behind this low utilization and had some surprising revelations. Our investigations revealed two main reasons for the poor quality of the corneas were as follows:

a. Lack of awareness and understanding by relatives on how to preserve the eyes after death of their loved ones

b. Incentive payment of Rs.2,000 by the government for each donation to the eye bank working against the system

The family members who wish to donate the eyes of their relatives should understand that the eyes that get dry and swollen after death, deteriorate very fast and cannot be used for transplantation. To keep them from drying, one needs to keep the eyes moist by using a wet cotton swab. Other precautions that need to be taken include switching off the fan over the body, propping the head under a pillow (to reduce swelling) and switching on air conditioner in the room, if available.

The payment issue is more controversial and was started by the government many years ago to incentivize eye banks in promoting eye donation and get more corneal donations. However, public health experts are skeptical and say that this practice maybe working against the system. The system encourages eye banks to get as many corneas as possible without worrying too much about the quality of the retrieved tissue. Manoj Gulati, Sight Life country director for India, said that the financial incentive to eye banks for eye retrieval is one of the main reasons that leads to eyes being wasted."Eye banks get a handsome amount of Rs.2,000 per pair of eyes. The scheme has shifted the focus to collecting as many as they can from retrieving only transplantable tissues. There is also a standard protocol to follow before retrieving a tissue. This includes the examination of the medical and surgical history of the donor. In many cases, this protocol is not followed properly," he said.

But Lalitha Raghuram, country director of MOHAN Foundation, said that  eye banks never say no to anyone who wants to donate their eyes. "If they reject a cornea considering the age of a donor or citing some other reasons, it will create a bad impression and people will not come forward to donate their eyes," she said.

Lalitha, who had earlier worked with the Eye Bank Association of India, said that half of donated eye are actually not going waste. "The eye those can't be used for optical purpose is actually used for research, " she said.

Dr. S. Tony Fernandes, a Padmashree awardee for his contributions to eye care, said that lack of coordination among eye banks also leads to eye wastage. "Tamil Nadu leads the country in cadaver organ donation. Unlike their cadaver organ donation program, there is no free flow of information between eye banks to facilitate eye donations. Better co-ordination among eye banks is important and they must be open to information sharing," he said.

He said that Eye Bank Association of India (EBAI) should work as a centre for all India activities of coordination and networking for procurement and distribution of eyes.

"A national level registry should be maintained for eye donation and eye transplantation. The association should also take necessary steps to make people aware of eye donation. As of now, the situation is miserable and people are less aware of activities of eye banks and what are they used for," he added.

Eyes donated in hospitals have a better quality. The success with cadaver organ donation has resulted in improved eye donation in the hospitals. In fact, the number of eye donations are much more than solid organ donation, thanks to this programme. An example of this success is the Rajiv Gandhi General Hospital in Chennai. There were hardly any donations taking place before the cadaver programme started. In the last three years, there have been around 100 corneal donations.

To improve the quality of corneas should be the focus of Government of India and Medindia's recommendations to the Government are as follows:

1. Create more awareness on not only eye donation but also the do's and don'ts of corneal donation

2. Provide incentives at two levels to eye banks depending on the quality of the corneas and its utilization.

3. More corneal donation and procurement should be encouraged in hospitals.

Source: Medindia
Quiz on Eye Donation
Donating your eye after death can give vision to two potentially blind patients during their life. Take this quiz and test your knowledge on eye ...
READ MORE 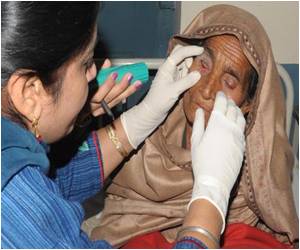 Did You Know Baking Soda Improves Our Eye Sight?
Scientists have found that baking soda can alter our vision by changing the visual signal generated by photo-receptors in the eyes.
READ MORE