How Does Acute Pain Crisis in Sickle Cell Disease Arise?

A new study from MIT has explained how and why sickled red blood cells in sickle-cell disease or SCD stick to blood vessels.

One common painful complication of sickle-cell disease is known as vaso-occlusive crisis or sickle-cell crisis. It is initiated when deformed or sickled red blood cells (RBCs) clump together and block or occlude tiny blood vessels. This action causes acute episodes of severe pain (crisis) and swelling in the affected body parts. The acute pain that occurs is a common reason why SCD patients seek medical care in hospital emergency departments. They are treated with opioids or other drugs.
How Does Acute Pain Crisis in Sickle Cell Disease Arise?

"These painful crises are very much unpredictable. In a sense, we understand why they happen, but we don't have a good way to predict them yet," says Ming Dao, a principal research scientist in MIT's Department of Materials Science and Engineering and one of the senior authors of the study.


‘A complication of sickle-cell disease called vaso-occlusive crisis results in acute pain in patients. Researchers have now found out how the crisis occurs and may be on the path to prevent it.’


The protein hemoglobin (Hb) in red blood cells is responsible for carrying oxygen throughout the body. When a single mutation occurs in the gene that codes for Hb, the red blood cells which are usually disc-shaped become sickle-shaped, especially in low oxygen conditions. Hence the condition is known as sickle-cell disease.

SCD patients often suffer from vaso-occlusive crisis and anemia since the changed Hb cannot carry as much.

The team of scientists designed a specialized microfluidic system that would simulate the post-capillary vessels These vessels inherently carry oxygen-deprived blood away from the capillaries, are about 10-20 microns in diameter, and are the most common sites for vaso-occlusions.

They designed the system in such a way that they could control the oxygen level. When they created very low oxygen levels, otherwise known as hypoxia, similar to what is seen in post-capillary vessels, they found that sickle-cells became two to four times more prone to stick to the blood vessel walls than they were at normal oxygen levels.

The reason is when oxygen is low, hemoglobin present in sickle cells forms stiff fibers that become larger and push the cell membrane outward as well as helping the cells to stick more firmly to the blood vessel lining.

"There has been little understanding of why, under hypoxia, there is much more adhesion," says Subra Suresh, president of Singapore's Nanyang Technological University, former dean of engineering at MIT, and the Vannevar Bush Professor Emeritus of Engineering. "The experiments of this study provide some key insights into the processes and mechanisms responsible for increased adhesion."

Another discovery made by the researchers was that in SCD patients, the cells that are most likely to adhere to blood vessels are the immature red blood cells called reticulocytes. The reason being younger sickle red cells, just released from bone marrow, have greater cell membrane surface area than mature red blood cells, which allows them to create more adhesion sites.

"We observed the growth of sickle hemoglobin fibers stretching reticulocytes within minutes," says lead author and MIT postdoc Dimitrios Papageorgiou. "It looks like they're trying to grab more of the surface and adhere more strongly."

Earlier the researchers had studied how long it takes the blood cells from the SCD patients to stiffen so that they become more likely to block blood flow in the tiny vessels.

Next, the researchers want to combine their earlier study with the current findings on adhesion and devise a complete model of vaso-occlusion.

Vaso-occlusion does not occur with all SCD patients, and the patients who experience it have different frequencies of attacks. Hence, the MIT researchers hope their findings would help them predict crises for individual patients that would help to give personalized treatment. 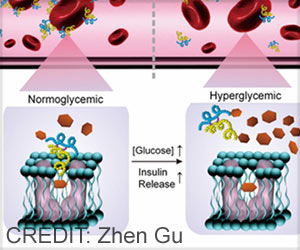