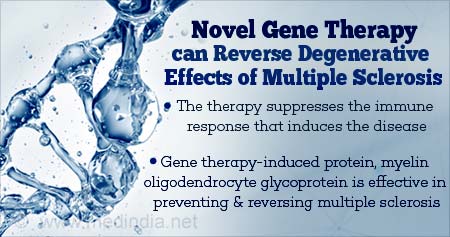 T-regulatory cells known as Tregs have a critical role in immune tolerance. Tregs suppress the effector CD4+ T cell subsets which control and mediate autoimmune responses. Suppression and dysregulation of CD4+CD25+FOXP3+ Tregs have been linked the pathogenesis of MS. A good therapy to control the disease is to selectively induce auto-antigen specific CD4+CD25+FOXP3+ (forkhead box P3) Tregs. There have been many studies indicating the potential of Treg-based immunotherapies. For example, the transfer of polyclonal CD4+ CD25+ Tregs has temporarily prevented or reduced the effects of autoimmune encephalomyelitis (EAE) in mouse models of MS. However, the challenge is to develop a robust and sustainable immune-regulatory therapy.

Multiple Sclerosis
Multiple sclerosis can be a severely disabling autoimmune disease that affects the myelin or insulating layer of the nerve fibers and typically has remissions and relapses
Advertisement
‘Adeno-associated virus (AAV) immunotherapy has immense potential for reversing the degenerative effects of multiple sclerosis.’

A research team from the University of Florida have discovered a novel gene therapy to reverse the degenerative effects of multiple sclerosis using adeno-associated virus (AAV) immunotherapy, which has immense potential for reversing the degenerative effects of multiple sclerosis. The research team developed an in-vivo gene therapy using pre-clinical mouse models. They designed a liver-targeting gene transfer vector which enables the expression of full-length myelin oligodendrocyte glycoprotein (MOG) in hepatocytes (liver cells). This gene immune therapy leads to the production of MOG-specific regulatory T cells (Tregs) in the body and this restores the immune response of the body in multiple sclerosis.


The study demonstrated that hepatic gene therapy with the AAV vector with the full DNA coding sequence for MOG could prevent and reverse the existing effects of EAE. This type of gene therapy resulted in the production or expansion of antigen-specific FOXP3+ Tregs. When the therapy was given to mice with mild to moderate neurological deficits of MS, they showed signs of improvement and were protected from EAE. The vector therapy reversed the clinical and pathological signs of MS. Along with a short course of immunosuppressant's and AAV therapy, the mice were protected from end-stage fatal EAE with the possibility of even restoring mobility after severe paralysis.

From the above experiment and reporting, it is clear that AAV therapy plus a short course of immunosuppressant drug rapamycin not only prevents debilitating symptoms of MS but also reverses existing symptoms if administered in the early stages. This model of gene therapy in combination with an immunosuppressant is superior to traditional models of prophylactic treatment using non-specific drugs. This clinical therapy can not only be used for MS but has the potential for other human autoimmune diseases and this research needs further investigation on these lines.


What is Multiple Sclerosis?

Multiple Sclerosis is an autoimmune disease of the central nervous system (CNS) affecting the brain and spinal cord. Myelin is a protective sheath around the nerve fibers in the CNS. The nerve fibers are responsible for transmitting messages between the brain and the body. In MS, the body's immune system mistakes the myelin for a foreign body and starts attacking the protective sheath. The damaged myelin sheath often leaves the nerve fibers exposed with lesions and plaques. The damaged myelin sheath can disrupt the flow of brain-body messages. In some cases, the nerve fibers can get damaged and this damage is what leads to increasing disability in MS.

Multiple Sclerosis is a Tough Disease to Manage but It is Not Impossible
On World MS Day, a cheerful 37-year-old single mom in India recounts her personal journey of living with Multiple Sclerosis.
Advertisement
Some of the early signs and symptoms of MS can include:
References :Source: Medindia

Quiz on Multiple Sclerosis
Multiple sclerosis is an autoimmune disease that affects nerves and can leave the affected patient completely disabled. Test your knowledge on this condition by taking this quiz.