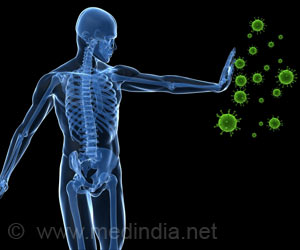 Research by Luxembourg Institutes of Health's scientists has identified a new molecular mechanism which activates the immune cells in humans. The crux of the whole activation is in the expression of a gene called Gclc. When this gene is expressed in T cells, it aids in warding off pathogens.

The gene Gclc is associated with the synthesis of a protein which is vital for the production of glutathione. Glutathione is present in all cells in the body and it is known to be an antioxidant, a detoxifying agent and a free radical scavenger. It is also important in the regulation of gene expression, DNA and protein synthesis, signal transduction, cell proliferation and apoptosis. Glutathione reacts with free radicals to form harmless products and is involved in the transport of amino acids across cellular membranes.


A research team from the Department of Infection and Immunity led by Prof. Dirk Brenner found that T cell's energy metabolism was stimulated by glutathione. This allows the growth of T cells when they come into contact with pathogens like viruses. The molecular switch afforded by glutathione could be used as a therapeutic target for cancer as well as for autoimmune diseases and the study was published in the journal Immunity.

Prof. Dirk Brenner said that it was important to maintain the immune system in a carefully balanced equilibrium. An over activation of the immune system could result in these cells turning against the cells in the body and, thereby, leading to autoimmune disorders. On the other hand, if the immune reaction is very weak then infections or even cancer could become potentially life threatening.

Persistant Infection Leads to Long-Term Immunity
Persistent infection hones the immune memory against the pathogen that causes an infection, leading to long-term protection
Advertisement
Immune cells are normally found to be present in a state of hibernation when their energy utilization is low and are activated when they come into contact with pathogens. The activation of the T cells leads to the development of reactive oxygen species that are harmful to the body. As the concentration of these oxidants increases, T cells are forced to synthesize antioxidants to prevent damage.

This is the first study to identify the role of antioxidants in great detail in T cells. The scientists involved in the study found that in T cells, glutathione is not only a means to remove reactive oxygen species but it is also effective in altering energy metabolism that controls immune response. This newly discovered role of glutathione is beneficial for various diseases.

The director of Luxembourg Institutes of Health Department of Infection and Immunity, Prof. Markus Ollert said that the results of the study could be used for developing targeted therapy.

Studying the Effect of Gclc gene

Braunschweig University of Technology's Prof. Karsten Hiller who collaborated with the scientists from Luxembourg University scientists said that the complex interplay between cellular metabolism and immune activation wasessential for the proper functioning of the immune system. During cancer, immune cells are altered to a low metabolic state resulting in an active suppression of the immune response. The current study could be used to improve the immune cells and make them more efficient in warding off cancer. As a next step, the scientists are planning to develop therapeutic targets based on their study to boost the immune system against pathogens as well as cancer.

Glutathione is known as the Master Oxidant as it serves as a garbage disposer, removing all the free radicals that are generated in the cells. It is an abundant natural tripeptide that is present in almost all the cells of the body. This molecule is highly reactive which serves several vital roles inside a cell including maintaining the redox state, antioxidation and modulation of the immune response.

In cancer, glutathione has both a protective as well as a pathogenic role. It is important for the removal and detoxification of cancer causing agents, and altering this pathway could affect cell survival. However, glutathione increases resistance to many chemotherapeutic drugs, protecting cancer cells present in the breast, larynx, bone marrow, colon and lung cancers.

This master oxidant could be manipulated to boost immunity against pathogens and cancer in order to produce effective treatment strategies.

A food additive is a non-nutritive substance added deliberately to any food product to improve its color, ...

A popular garden herb, mint has earned worldwide fame both in the kitchen as well as health. A tasty garnish ...

Anti-oxidant property of guava has recently been found be the highest amongst commonly consumed Indian ...