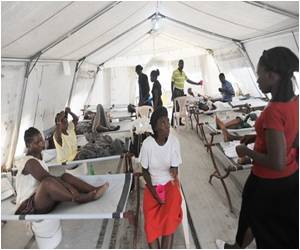 Massive damages claims filed by lawyers after UN peacekeepers were accused of introducing a cholera epidemic to Haiti were formally rejected by The United Nations on Thursday.

About 8,000 people have died in the epidemic but UN spokesman Martin Nesirky said the global body had told lawyers the damages claim was "non-receivable" under a 1946 convention laying out the UN's immunities for its actions.

UN Secretary General Ban Ki-moon telephoned Haiti's President Michel Martelly on Thursday "to inform him of the decision and to reiterate the commitment of the United Nations to the elimination of cholera in Haiti," Nesirky said.


Certain health experts have said the cholera epidemic, which erupted in late 2010, was introduced to Haiti by Nepalese peacekeepers. The United Nations has never acknowledged responsibility, insisting it was impossible to pinpoint blame definitively.
Advertisement
Lawyers for the families of some of the dead and the 635,000 people estimated to have been made sick by the cholera had predicted a damages award could cost the UN more than one billion dollars.

"The secretary general again expresses his profound sympathy for the terrible suffering caused by the cholera epidemic, and calls on all partners in Haiti and the international community to work together to ensure better health and a better future for the people of Haiti," Nesirky said.

Research Sheds Light on Cholera's Nano-Dagger
Previous research has shown that different species of bacteria battle for dominion over their ......