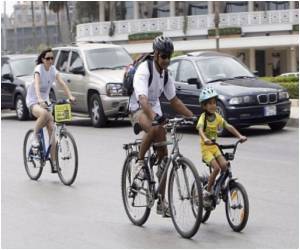 In a bid to promote eco-friendly means of transportation, more than 150 activists pedalled across the Lebanese capital of Beirut on Saturday, cutting off traffic along a scenic seaside road.

"Participation in this event reflects the desire for a swift and conclusive solution for the traffic and pollution problems," said Lily Abi Chahine, an organiser of the "Darreja" campaign funded by the Dutch embassy in Beirut.

"Using bicycles is a first step that we encourage, just like using public transport and car-pooling." One of their demands is for the city to lay out bicycle paths.


Security forces blocked traffic on the main seaside road of the capital to make way for men, women and children cyclists as well as the Danish and Dutch ambassadors, who were also on bicycles.
Advertisement
"Darreja," a play on the words "bicycle" and "trend" in Arabic, aims to encourage the state to create bicycle lanes across metropolitan Beirut, which is plagued by year-round traffic that peaks during the summer tourist season.

Road safety and public transportation are also minimal in Lebanon, where car ownership rates are among the highest in the Middle East.

Environment Minister Mohammed Rahhal warns that temperatures in the eastern Mediterranean country are expected to rise two degrees on average in the next four decades and five degrees by the turn of the century.

Rainfall is also expected to drop 50 percent by 2099 if measures to fight climate change are not put into effect, he said.