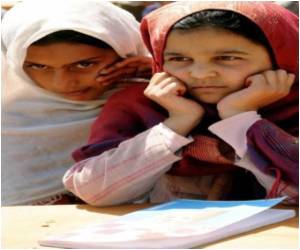 Despite living in the heart of the violent birthplace of the Taliban movement and defying long-standing Afghan convention and family advice, mothers Magola and Faranaze decided to take up arms. As police officers.

From the southern province of Kandahar, they are among a handful women who have swapped the full Islamic veils known as burqas for life in uniform as members of Afghanistan's under-strength police force.

Taliban Planning to Use HIV Bombs to Infect British Troops

An attempt is being made by the Taliban to infect British troops with HIV, The Sun reveals.
Advertisement

"My parents don't like me to work for the police but I am happy to serve my country," said Magola, proudly wearing her blue uniform at the camp where she has been trained by US-led NATO forces.


Magola and Faranaze are not their real names. Afghanistan is a country where strict Islamic beliefs and conservative convention prohibit most women from working. Out of a thousand recruits, police in Kandahar have only 20 women.

Scorching Heat, Not Talibans, Number One Enemy For Soldiers In Afghanistan

After hours of ferocious fighting in southern Afghanistan, the two young US Marines desperately needed emergency medical care - and it was the heat, not the Taliban, that had finally defeated them.
Advertisement
Widowed during the 1996-2001 Taliban regime, Magola confided that she needed her police salary to feed her family. She has 12 children and six are still dependent on her.

Like most Kandahari women, female officers wear burqas off duty. But at work, wearing scarves or hoods with their uniforms, women perform essential roles in areas that remain off limits to men.

Female officers are responsible for knocking on doors, and ushering women away from homes before police swoop in for operations against suspects.

"When the police are searching a compound, they can't go first. We have to knock on doors, explain why we are here, take the women aside so they can go inside," said Faranaze.

"Once I went to a compound, we were looking for a pistol. The man had asked the woman to hide it. I went to her and said: 'I am going to slap you if you don't tell me where it is'. She had put it in a cooking pot."

But they also encounter considerable risks in the war-torn country, where police are regularly targeted by insurgents.

In Kandahar, "the Taliban assassinate people, there are one or two murders every day", said Magola.

NATO forces are focused on training more police as part of one of their most ambitious counter-insurgency operations in the nine-year Afghan war.

Operations to beat back the Taliban in Kandahar, heartland of a bitter insurgency against the Western-backed Afghan government, are due to escalate in coming months as thousands more troops deploy.

Afghan police and security forces are frequently on the front line. Three bombers attacked a police training centre in Kandahar this week, damaging the outer wall of the compound before they were killed.

Among several other women on the force, one survived a bombing at their headquarters in downtown Kandahar city. Another tells of having been followed several times in the street recently.

Besides the risks to their lives, Magola and Faranaze face disapproval from families who object that they work or simply fear for their safety.

"One of my brothers works at the Saraposa prison. He told me to stop working for the police. I shook his hand and told him I would work with him hand in hand until I die," Faranaze said.

During the Taliban regime, she said, "it was very hard, the Taliban didn't like women to leave the house. They were beating women with sticks."

"We want God to take them away from the province. But without God's will we won't be able to do anything," Faranaze said.

For Magola, however, there can be no question of the Islamist insurgents returning to power.

"Every day I feel like I am going to die," Magola said. "But I don't want to die until I kill a Taliban.

Laiba, all of seven , stands as a testimony for the thousands of Pakistanis who have lost limbs in the war between Islamist militants and the armed forces.
Advertisement

When Sara Qaiser celebrated her wedding, her dream day was attended by armed guards and guests who had been frisked by Pakistani soldiers.
Advertisement