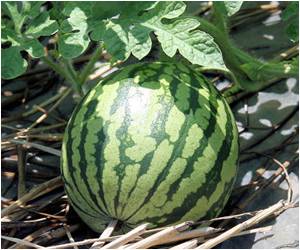 Broadly employed farm practice of grafting watermelon, other melon plants onto squash or pumpkin rootstocks reveals larger quantity of certain pesticides in the melon fruit, report scientists in a new study. Although only low amounts of pesticides appeared in the fruit in the study, the scientists advise that commercial farmers use "caution" when grafting watermelon plants to squash in a report that appears in ACS' Journal of Agricultural and Food Chemistry.

Mehmet Isleyen and colleagues explain that farmers graft watermelon and other fruits onto the roots of gourd plants because it makes the fruit more resistant to diseases. In Turkey, where the group did the study, more than 95 percent of watermelons grow from grafted seedlings. Although the gourds are hardier, previous research has shown they accumulate pesticides called organochlorines. Organochlorines have been widely banned because of concerns about their effects on human health and wildlife. Despite the fact that their remnants can linger in the soil for decades, some organochlorines remain in use. While traditional watermelon plants do not take up these compounds, the researchers wanted to resolve uncertainty about watermelon grown on the roots of plants in the squash family.

For stunning looks like that of Brangelina Jolie and winning knocks like Sachin and Dhoni - go for watermelon fruits. Watermelon acts as a natural moisturizer as well as a toner and keeps the skin cool, glowing and fresh.
Advertisement

The group grew common Turkish watermelon-squash graft seedlings in soil taken from a farming region there. They tested the roots, stems, leaves and fruit of the plants and found that organochlorine levels were as much as 140 times higher in the stems of squash-grafted watermelons than in intact watermelons. However, while still urging caution, the group notes that these levels are 6-12 times lower than accepted limits of the pesticides in produce in the U.S. and Turkey.

Growth-accelerating Chemicals Blamed For Drop in Sales of Watermelons

Danyang city in East China's Jiangsu province sees sharp drop in sales of watermelons after reports of the fruit being injected with growth-accelerating chemicals.
Advertisement
<< Think Out of 'Babies in Hats' to Get the Best of Medicinal T...
Scarce Access to Anti-Retrovirals for DR Congo HIV Patients >>

Loram (2 mg) (Lorazepam) Drug - Food Interactions How to Reduce School Bag Weight - Simple Tips Find a Hospital Vent Forte (Theophylline) Noscaphene (Noscapine) Drug Side Effects Calculator Accident and Trauma Care Blood Donation - Recipients Blood - Sugar Chart
This site uses cookies to deliver our services. By using our site, you acknowledge that you have read and understand our Cookie Policy, Privacy Policy, and our Terms of Use