Go for Peel Sans Banana to Ward Off Depression

Taiwan researchers have discovered that banana peel extract can ease depression and protect the retina.

A research team from Taichung's Chung Shan Medical University found after two years of research that banana peel is rich in serotonin, which is vital to balancing moods, the Apple Daily newspaper reported Monday.


The team also found that banana peel extract could protect the retina from damage caused by light because it can cause retina cells to regenerate.

It suggested drinking banana peel water or juice in the evening, once a day or several times a week.

The research team planned to launch human tests on the benefits of banana peel extract soon, the newspaper said.

Banana peel contains lutein, an antioxidant from the carotenoid family, which provides nutritional support to the eyes. Lutein can also be found in green, leafy vegetables, some fruits and corn.

In its clinical tests, the research team exposed two groups of retina cells - one a control group and the other group soaked in a solution of banana peel extract - to strong light six hours a day for two days.

At the end of the experiment, the control group of retina cells had died while the group soaked in banana peel extract had regenerated and suffered no damage. 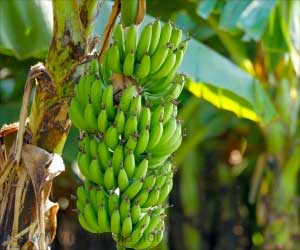