Glassphemy! Smashing Way to Save the Planet 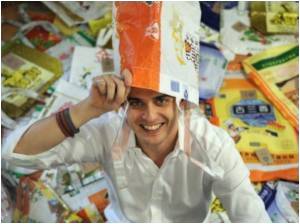 New York's latest wacky invention is "Glassphemy!" - that helps irate individuals chuck bottles at others, and save the planet.

Throwing bottles into recycling bins is not new, but throwing them at people at the same time is.

Urban farming is a growth industry in New York city's concrete jungle, and with little open land free agriculturalists and beekeepers have taken to the rooftops to pursue their passion.
Advertisement

Eco-minded artists in a gritty area near Brooklyn's notoriously polluted Gowanus Canal have set up a tower-shaped container made of bullet-proof glass and metal frames that allows visitors to do just that.


Guests -- allowed by invitation only -- are encouraged to stand on a high platform and hurl bottles down against the glass wall.

On the other side at a safe, but still shockingly close distance, stand their friends, or enemies, trying not to flinch as the bottles rain down and smash next to their faces.

A survey has revealed that New York is the best city in the world for blokes.
Advertisement
The bottles don't just explode into pieces, they set off flashing lights controlled by sensors attached to the installation.

That's the fun part. The serious part is that the broken glass slowly collects in the huge container for recycling.

The artists behind the project call it a "psychological recycling experiment".

"There was a panel in Philadelphia. The architects were saying 'How can we motivate the people not to go and smash things?'" recalled David Belt, head of the creators Macro Sea, who last summer entertained New York by turning dumpsters into urban swimming pools.

His wife, Belt said, was the first to cast glass.

"My wife through some bottles at me the other night, a little too hard, but she felt much better afterwards," he said. "It is all about purging your aggressiveness."

One visitor, John Wischmann, 45, said the sensation of throwing a bottle at a friend -- albeit separated by the invisible safety wall -- was "very satisfying".

"I feel relieved, It feels so good to break some shit over your friend's face," he said.

Joshua Weeks, 29, was overawed by the liberating feeling of being on the other end.

"It was a unique experience. I've never had an experience like that in my entire life: to watch a bottle come, flying at you, and hit you in the face," he said.

"It is all about combining a visceral sensation like that with the concept of recycling."

One of the builders of the glass cage, Jocko Weyland, said the installation was as much a tool for recycling human energy as waste matter.

"In our modern society, most people are in offices and don't have an outlet. This is giving people an outlet for urges that are inside," he said.

"It was so fun! It was a release of energy, it was cathartic."

"Glassphemy!" is a private affair, but readers of ReadyMade magazine are being asked to take part in the next problem to be solved: the cleverest uses for all that broken glass.

One of the last places selling real pickles -- the crunchy, hand-crafted, Jewish - is the tiny Pickle Guys store in Manhattan.
Advertisement
Advertisement
This site uses cookies to deliver our services.By using our site, you acknowledge that you have read and understand our Cookie Policy, Privacy Policy, and our Terms of Use  Ok, Got it. Close
×