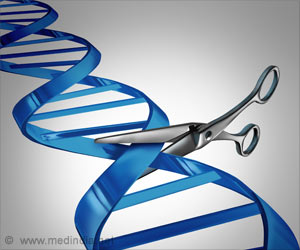 Novel gene therapy approach can treat an eye disease that causes progressive loss of vision, as per a study from Trinity College - School of Genetics and Microbiology, Dublin in collaboration with clinical teams in the Royal Victoria Eye and Ear Hospital and the Mater Hospital, published in the journal, Frontiers in Neuroscience.

Dominant optic atrophy (DOA) is a genetic disorder characterized by degeneration of the optic nerves and gradual loss of vision leading to even blindness. It is manifested usually in early adult years with no cure at present. It is caused by the mutation of a gene known as OPA1, that produces a protein responsible for the function of mitochondria - the energy house of a cell.


The scientists demonstrated a visual functional recovery in mice model of mitochondrial dysfunction - DOA. The OPA1-based gene therapy also enhanced the mitochondrial performance in human cells that had OPA1 gene mutations, thereby promising effective therapeutics in patients having these mutations.
Advertisement
"We used a clever lab technique that allows scientists to provide a specific gene to cells that need it using specially engineered non-harmful viruses. This allowed us to directly alter the functioning of the mitochondria in the cells we treated, boosting their ability to produce energy which in turn helps protects them from cell damage", says Dr. Maloney, Research Fellow, Trinity's School of Genetics and Microbiology

The novel gene therapy also signified benefits for a broad spectrum of diseases that involves mitochondrial dysfunction including neurological diseases like Alzheimer's and Parkinson's disease. This can help in formulating possible gene-based treatments to bring hope to the life of these patients.

Does Visual Illusion Explain Enigmatic Human Behavior?
Convolutional neural networks (CNN), an analog to the human visual cortex, are found to be deceived ...

Copper Agents can Detect Plaques in Alzheimers Disease
Copper isotopes can detect the presence of beta-amyloid plaques in the brains of Alzheimer's ......