A study led by an Indian researcher has found a gene known as atrogin-1, which plays a key role in statin-related muscle toxicity.

Statins, the popular class of drugs used to lower cholesterol, are among the most commonly prescribed medications, but for some patients, accompanying side effects of muscle weakness and pain become chronic problems and, in rare cases, can escalate to debilitating and even life-threatening damage.


"Although it is not known exactly how many of the 500 million individuals who take statins experience muscle pain and weakness, muscle symptoms are generally considered the most common side effects of these medications," Sukhatme said.

"Statin users describe a wide spectrum of symptoms - at the most extreme end is a severe breakdown of skeletal muscle known as rhabdomyolysis," he said.

"At the other end is 'grumbling muscles,' milder, more diffuse muscle soreness and cramps. This kind of symptomatic muscle weakness and pain is quite frequent, but often difficult to quantitate," he added.

"We learned that atrogin-1 is rapidly turned on in wasting muscle," said Lecker, an investigator in the Division of Nephrology at BIDMC and Assistant Professor of Medicine at HMS. Muscle wasting occurs in a large number of disease states, including cancer, AIDS, and kidney disease and can also occur when muscles are underused due to injury or lack of exercise.

"In the absence of atrogin-1 activation, muscle atrophy is diminished," Lecker said. Since atrogin-1 has been found in every existing model of muscle wasting, prompting the researchers to investigate whether cholesterol-lowering statins might also be "turning on" this gene.

"We reasoned that since atrogin-1 plays a key role in the development of wasting in skeletal muscle, it might also mediate part of [patients'] sensitivity to statins," the researchers said.

The analysis showed that atrogin-1 expression was significantly higher among the statin users. Next, the scientists studied statins' effects on cultured muscle cells treated with various concentrations of lovastatin. Compared with control samples, the lovastatin-treated cells became progressively thinner and more damaged. But the cells lacking the atrogin-1 gene were resistant to statins' deleterious effects.

Finally, the authors tested the drug in zebrafish. And, they showed that just as in mammalian muscle cell culture, lovastatin led to muscle damage, even at low concentrations; as the concentration was increased, so too was the damage. And, once again, they observed that fish lacking the atrogin-1 gene were resistant to statin-induced damage. "These three complementary experiments demonstrate that atrogin-1 has a fundamental role in statin-induced toxicity," Lecker said.

"Future experiments will be aimed at understanding how statins turn on the atrogin-1 response in muscle, and in ascertaining what transpires in muscle following atrogin-1 activation that leads to muscle damage and atrophy. The hope is that eventually patients will be able to glean statins' positive benefits to cholesterol metabolism and reduction of cardiovascular events while being spared accompanying muscle toxicities," he said.

The study will be published in The Journal of Clinical Investigation.

Dont Discontinue Statins, Stroke Victims Told
Cholesterol-lowering statins could make all the difference between life and death and should not be discontinued by stroke victims, researchers say.
READ MORE 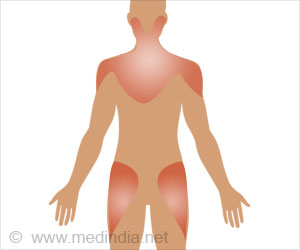 Polymyalgia Rheumatica
Polymyalgia rheumatica is an inflammatory disease that usually occurs in people above 60 years of age and is marked by severe muscle pain, muscle stiffness and cramps on both sides of the body.
READ MORE