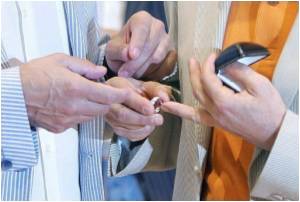 A federal judge has overturned California's ban on same-sex marriage, the opening salvo in a high-stakes legal battle expected to take years to resolve.

In a written opinion, US District Court Judge Vaughn Walker ruled Wednesday in favor of activists who argued that a state referendum which barred gays and lesbians from marrying was discriminatory and therefore violated the US Constitution.

A lawsuit challenging the California law that outlaws gay marriage in the state moved a major step closer to a federal trial.
Advertisement

The referendum, known as Proposition 8, was passed by a 52 percent majority in November 2008, only six months after California's Supreme Court overturned a previous ban on same-sex weddings, sending gays and lesbians flocking to marry.


However, Walker wrote in a ruling Wednesday that Proposition 8 failed to "advance any rational basis" to deny gay men and lesbians a marriage license.

Argentina's President Cristina Kirchner signed into law a historic bill that legalizes same-sex marriage for the first time in Latin America.
Advertisement
"Indeed the evidence shows Proposition 8 does nothing more than enshrine in the California constitution the notion that opposite sex couples are superior to same sex couples," Walker wrote.

Opponents of same-sex marriage had vowed to appeal Walker's decision if it went against them.

Walker later issued a ruling granting a temporary stay of his order until Friday, allowing opponents of same-sex marriage time to file appeals, a move that appeared to prevent an immediate resumption of weddings between gays and lesbians in the most populous US state.

Legal experts believe the case is almost certain to eventually end up before the US Supreme Court once the appeals process has run its course, something likely to take years.

Gay rights activists expressed delight at the decision but warned they were bracing for further legal battles ahead.

Hollywood director Rob Reiner, one of the prominent celebrity supporters of gay marriage, said the issue had built an unstoppable momentum.

"When we make it to the Supreme Court, and we win, this will take its place alongside Brown vs The Board of Education," Reiner told AFP, referring to the famous Supreme Court decision that desegregated American public schools.

"The tide is shifting in this country."

However, opponents of same-sex marriage lashed out at the ruling, with Randy Thomasson of the socially conservative SaveCalifornia.com -- Campaign for Children and Families describing it as a "terrible blow" to voter rights.

"Judge Walker has ignored the written words of the Constitution, which he swore to support and defend and be impartially faithful to, and has instead imposed his own homosexual agenda upon the voters, the parents and the children of California," Thomasson said.

The president of the American Family Association, Tim Wildmon, accused Walker of a "tyrannical, abusive and utterly unconstitutional display of judicial arrogance."

Proposition 8 effectively nullified a May 2008 California Supreme Court decision by redefining marriage as a union only between a man and a woman.

A failed attempt to overturn the referendum in California in 2009 prompted activists to take their fight to federal courts, a strategy seen as risky because it would likely result in a US Supreme Court ruling, which would settle the socially divisive issue once and for all with no possibility of appeal.

Attorneys for gay marriage opponents argued during 13 days of hearings earlier this year that Proposition 8 is legal and based on a centuries-old tradition of male-female marriage.

However, Walker gave a withering verdict of the tactics used by opponents of gay marriage during the campaign to pass Proposition 8.

"Moral disapproval alone is an improper basis on which to deny rights to gay men and lesbians," Walker wrote. "The evidence shows conclusively that Proposition 8 enacts, without reason, a private moral view that same-sex couples are inferior to opposite sex couples."