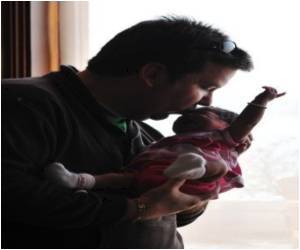 Children adopted by gay or lesbian couples grow and develop as well as those adopted by regular couples, a recent study has revealed.

The study found that whether or not adoptive children were developing in positive ways was unrelated to the sexual orientation of their adoptive parents.

Under new Australian laws gay and lesbian couples will have the same rights as heterosexuals.
Advertisement

"With thousands of children in need of permanent homes in the United States alone, our findings suggest that outreach to lesbian and gay prospective adoptive parents might benefit children who are in need," said U.Va. psychology professor Charlotte J. Patterson.


In fact, how well children were adjusted was significantly associated with how warmly their parents were oriented to them.

The finding appears in the August issue of the journal Applied Developmental Science.

Many gay couples from the US are opting to get children by signing up surrogate mothers in India.
Advertisement
Advertisement
This site uses cookies to deliver our services.By using our site, you acknowledge that you have read and understand our Cookie Policy, Privacy Policy, and our Terms of Use  Ok, Got it. Close
×