From Hokey to Hipster: Stag Trophies in Germany Get a New Look 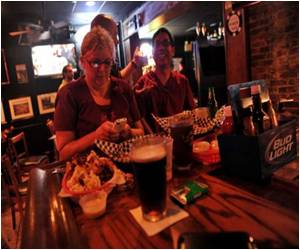 Self-respecting young urbanites in Germany would have turned their backs if they spotted a deer head or a set of antlers in a bar sometime back.

In the sometimes subtle language of taste and demographics, taxidermy in Germany screamed old fashioned, tacky and even a bit right-wing.

Good Outcomes With Staged Approach to Epilepsy Surgery in Children

A staged approach to epilepsy surgery with invasive brain monitoring followed by surgery in a single hospital stay is a safe and beneficial approach to treatment for complex cases of epilepsy in children.
Advertisement

Whereas in Britain, for example, mounted animals might conjure up stately homes and quaint rural pubs, Germans would be more likely to have faint echoes of the Bavarian backwoods and a parade of Nazi and communist strongmen earning their macho bona fides with hunting exploits.


But in the tradition of hipsters the world over, stag heads have been flipped into an ironic statement by those self-styled urbane, creative and politically progressive types in the uber-cool neighbourhoods of Berlin, Hamburg and Munich.

Patient in the Vegetative Stage may Actually be Aware

A patient in the vegetative stage-unable to move and speak may actually have signs of attentive awareness which was actually not detected before, a new study found
Advertisement
And, in the next iteration of the trend, upscale home furnishing designers are even selling blinged-out deer heads with rhinestones and gold-plating.

"It was a dust-gatherer, part of a dead animal which, should you have ended up inheriting one, you didn't know what to do with. Would the rubbish collectors pick one up?" Jennifer Wiebking wrote.

She said that taxidermy first started popping up in modish bars and restaurants before conquering the private flats of the style-conscious, where they are of course hung only with a wink and a nod.

"A rack of antlers is a wonderful style accessory to show that you have a sense of irony," she wrote.

German news agency DPA recently ran a piece headlined "Pimp My Antler Rack" profiling designers who decorate the mounted heads of roe, bucks, elk and cattle and sell them for a premium to hang in homes, restaurants and even offices.

A website, www.geweihshop.de, ships deer trophies in gold, silver and hot pink and even offers a rabbit head adorned with antlers, along with more traditional models.

Klaus Siebenhaar, a professor of cultural and media studies at Berlin's Free University, said that if many abroad think of "sauerkraut and sausage" when they think of Germany, Germans themselves link the stag trophy with their own national identity.

"It is the symbol of the German forest, of provincialism, of nature and at the same time of the petite bourgeoisie," he told AFP.

"It is the incarnation of German stuffiness."

He argued that mounted animal trophies were similar to the wildly popular Jaegermeister liqueur which uses a stag's head logo and has also managed in recent years to straddle the student-pensioner divide.

Ines Djampour owns Rudimarie, a cafe that attracts students and fashionable young parents alongside a few older longtime residents of the neighbourhood.

Carefully curated mismatched vintage garden furniture, antique lamps and wall hangings make up the decor, and a deer trophy has pride of place opposite the front door.

"In my childhood you saw an animal trophy and immediately thought of right-wing politics and that side of society," Djampour said.

"I think the time has come to use these trophies as decoration again in a different context with a sense of humour. As soon as they're taken out of one element and put in another you have a different relationship to them."

A short walk away, Kathrin Land said her restaurant and bar Major in the ultra-hip Reuterkiez area of the capital wanted a gentleman's-lounge look for their smoking room, which has two sets of antlers mounted on Baroque-patterned wallpaper.

"Of course it used to be fusty thing, you'd think of Bavaria, that kind of Disneyland Germany, and so you wouldn't go in, at least not in Berlin," she said.

"When I think of my mum and the '60s generation then she would have said 'oh God, this is the generation we rebelled against, this classic stuffy 1950s atmosphere'. I think for young people it's a kind of retro trash kitsch -- they think it's cool and kind of funny."

Like Djampour, Land said she wanted to cater to Neukoelln residents who knew the neighbourhood before the gentrification wave rolled through, driving up rents around 40 percent in the last three years.

Land admitted older people may have more negative associations with stag trophies because the 1950s "were a very repressive time in Germany too. But I think they get the joke."

From Hokey to Hipster: Stag Trophies in Germany Get a New Look Personalised Printable Document (PDF)