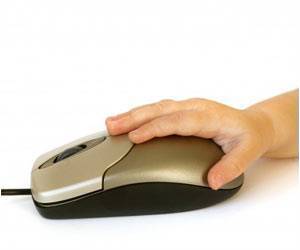 A new invention by the University of Washington scientists will help people with motor disabilities to use the computer mouse easily.

A new approach to help kids with paralysis and motor dysfunction improve their physical skills and inner confidence - magic, has been found by a researcher at Tel Aviv University.
Advertisement


The magnifier runs on Windows-based computer systems. It replaces the conventional cursor with a larger, circular cursor that can be made even larger for users who have less motor control. To acquire a target, the user places the large cursor somewhere over the target, and clicks. The Pointing Magnifier then magnifies everything under that circular area until it fills the screen, making even tiny targets large. The user then clicks with a point cursor inside that magnified area, acquiring the target. Although the Pointing Magnifier requires two clicks, it's much easier to use than a conventional mouse, which can require many clicks to connect with a target.

Half of All Bipolar Disorder Patients Grapple With Work, Social or Family Disabilities

A study conducted at the University of Granada has found that 50 pc of patients with bipolar disorder suffer some type of work, social and family disability, and approximately 20 pc
Advertisement
Another AIM technology, the Angle Mouse, similarly helps people with disabilities. Like the Pointing Magnifier, it may be downloaded, and two videos, one for general audiences and another for academic ones, are available as well.

Jacob O. Wobbrock, an assistant professor in the Information School who leads the AIM Group, suggests that users try both the Pointing Magnifier and the Angle Mouse before deciding which they prefer.

"We're achieving accessibility by improving devices that computer users already have. Making computers friendlier for everyone is the whole point of our work," Wobbrock added.

The paper was presented at the 2010 User Interface Software and Technology symposium in New York.

Children who have hypertension are much more likely to have learning disabilities than children with normal blood pressure, a new study by University of Rochester Medical Center (URMC) has indicated.
Advertisement
<< Research On How Brain's New Neurons are Controlled By Dopam...
Kids Fighting It Out is Good: Sibling Rivalry Betters Socia... >>