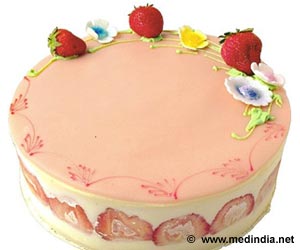 Little Theo Carnie is like a magician in the kitchen. Even though he is just five years old, he can bake cakes like a professional. Ask him about his inspiration and pat comes the response - Jamie Oliver.

Theo recently celebrated his birthday and he received a lavish cake as one of the gifts.


His mother, Verity, said: 'Just because he can't eat cake doesn't mean we shouldn't celebrate in the same way. It's still important to have a ritual. We all sang for him and he blew out his candles. He loves to bake and he's not bothered about other people eating around him.'
Advertisement
Doctors have blocked his stomach after he was diagnosed with a rare disorder when he was a baby. 'He carries a little backpack around with him which contains his special food and his pump. He just gets on with it. Theo has such a massive zest for life and he loves his friends and family. He's an incredible little boy'