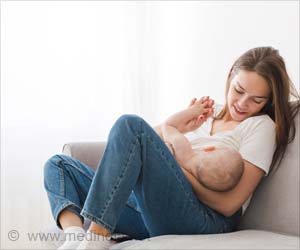 First milk expression within eight hours of giving birth was found to be associated with the highest probability of mothers of very low-birth-weight infants being able to provide milk throughout hospitalization in the neonatal intensive care unit, stated study led by physician researchers at Boston Medical Center.

Mother's milk has many benefits for very low-birth-rate infants, including reduction of necrotizing enterocolitis, sepsis, and chronic lung disease, and improvement in later childhood development. However, mothers of very low-birth-rate infants often have challenges making milk. They are more likely to have complications during or after delivery and comorbid health conditions that affect milk production, such as diabetes. They are also more likely to be separated from their newborn for a prolonged period of time after birth.


Because of these challenges, lactation support for mothers of very low-birth-weight infants is crucial. The World Health Organization's Baby-Friendly Hospital Initiative suggested milk expression within six hours after birth as one strategy for support. However, evidence for this time period is limited. In addition, milk expression within six hours can be difficult due to the need for intensive monitoring of newborns and/or mothers.
Advertisement
"Mothers who have recently delivered very low-birth-weight infants have a number of competing needs," says Margaret G. Parker, MD, MPH, a neonatologist at Boston Medical Center and the study's corresponding author. "Our data-driven approach to determining optimal time of first milk expression can help providers balance the need for safe maternal care with effective support to create long-term lactation success."

The authors note that given these results, randomized control trials are needed to further establish the causal relationship between timing of first milk expression and long-term lactation success among mothers of very low-birth-weight infants.

More News on:
Pasteurization of milk Mastitis Importance of Breastfeeding Types of Milk Drugs in Pregnancy and Lactation Why Do We Eat - Nutrition Facts Diet Lifestyle and Heart Disease Types of Food Allergies The Acid-Alkaline balance, Diet and Health Acid Base Dietary Balance and its Influence on Our Health and Wellbeing

Galactorrhea
Galactorrhea is the spontaneous breast milk production in a woman who is not pregnant or nursing a ....

Periodic Meetings With Lactation Consultants can Encourage Breastfeeding Among Women Who Resist It
Researchers have found that the chances of women breast feeding their babies improves after ......