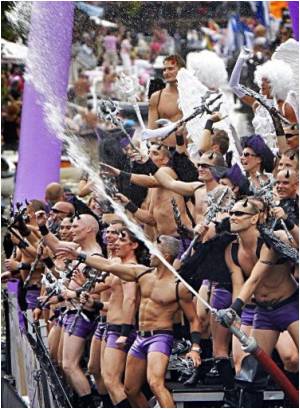 Organised by the city's small but growing Lesbian Gay Bisexual and Transgender (LGBT) community, the event went ahead peacefully with no attempt by police to stop the colourful convoy of about 100 activists despite their lack of official permission.

Experts have warned that three decades of safe-sex messages to gays have failed to stem the spread of HIV among that population.
Advertisement

"There was no intervention which is a good thing for Vietnam," said one of the organisers, Tam Nguyen.


She said the parade had helped unite the LGBT community and raise awareness among "curious" onlookers, although many had no idea what the rainbow flag -- an international symbol for LGBT groups -- symbolised.

A helpline for lesbians has been started by the Indian Community Welfare Organisation (ICWO) in Chennai.
Advertisement
The cyclists attracted no hostility -- and only a little attention -- as they made their way down Hanoi's busy streets.

"Vietnamese society supports us, supports this rally -- I have come out already and I have never had any problems," Hung Culif, 22, told AFP at the start of the event.

Homosexuality remains largely taboo in Vietnam, where Confucian social mores -- with their emphasis on tradition and family -- still dominate.

Gays are routinely portrayed in the media as comical figures or as people suffering from a condition that can be treated.

But in a surprise move late last month, Justice Minister Ha Hung Cuong said that it might be time to consider a change in the law to recognise same-sex marriage.

Vietnam currently forbids same-sex unions. Any move to legalise gay marriage would make Vietnam the first nation in Asia to do so.

The cyclists voiced strong support for the possible legal changes, shouting "we support same-sex marriage" and calling for equal rights for gays and lesbians.

"There is a lot of attention on gay rights issues now," Le Minh, 21, said as she attached a rainbow flag to her bicycle.

"There were (many) questions about gay marriage at the recent National Assembly session. It is really good for the community," she said.

Activists said they had modified the parade route after coming under pressure from police to avoid sensitive areas of the capital where anti-China demonstrations were taking place. Vietnam tightly restricts demonstrations.

"We don't have permission for this and even if we had asked for official permission it would not have been possible" to obtain, said Van Anh, 51. "But we have a lot of support from Vietnamese society."

Gays and lesbians in Vietnam still suffer from discrimination -- particularly from family members -- she said, adding that the pride parade and the possible marriage law change could help break down social stigma.

"As the National Assembly is now considering this, we hope that they will amend the law (to allow gay marriage), which would be a very positive thing for Vietnam, for Vietnamese culture," she added.