Filipinos Take to the Air 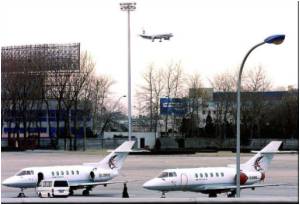 Millions more people in the Philippines are taking to the air, helped by dirt-cheap plane fares, aviation authorities said Thursday.

Carriers flew 22.82 million people to and from Philippine airports in the first nine months of last year, up 12.75 percent from a year earlier, Civil Aeronautics Board data show.

Bone health could be negatively impacted by long-duration space flights, a study has discovered.
Advertisement

Cheap and infamously unsafe ferries have long been the main form of long-distance travel for people in the impoverished Southeast Asian archipelago of more than 7,100 islands.


However the emergence of budget air carriers such as Cebu Pacific and Zest Air in recent years has seen them offer short-haul fares for about the same price as ferry rides to places that would take at least two days to sail to.

The risk of dying from a heart attack increases from living under a flight path, claims a new study.
Advertisement
No-frills airlines have also forced flag-carrier Philippine Airlines to offer matching fares on many of its domestic routes.

"That could be one of the reasons, yes," Grace Placido, a staff member with the Civil Aeronautics Board research unit, told AFP when asked if the rise of low-cost carriers was a factor driving passenger air traffic.

However government figures show ferry services remain the dominant mode of moving people between the major islands of the Philippines.

Hundreds of ferry passengers are killed every year due to shipping accidents, especially during the typhoon season.

Do Not Consume Sleeping Pills During Long-distance Flights

It is not advisable to consume sleeping pills during long-distance flights, a warning has been issued by Oz experts following the death of a woman from blood clots.
Advertisement
<< Noise Pollution Makes Urban Songbirds Change Their Singing ...
Beirut's Iconic 'Glass Cafe' To Close Down >>