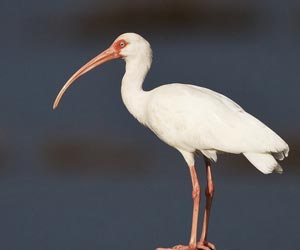 Researchers say that feeding birds not only can change their health, ecology and behavior, but also have negative consequences on your health. They recently launched a study to find out the impact of human feeding on white ibises in south Florida.

"In a previous study, and using molecular typing methods, we found that the strains of salmonella bacteria that white ibises are infected with are the same that some people get sick from, particularly in Florida," said one of the researchers, Sonia Hernandez, from University of Georgia.

An analysis of harmonious behavior among birds revealed that non-chosen couples were generally significantly less lovey-dovey than the chosen ones.
Advertisement
‘Shift in feeding behavior could have serious consequences not just for the white ibises but also to people.’

"Because white ibises move from urban to natural environments readily, they might be responsible for moving these strains around over large distances," Hernandez said. The white ibis is most commonly found in Florida and they are normally nomadic, can travel for miles every day and typically spend much of their day searching for food.


But why would they expend energy searching for food when humans at public parks will give it to them? "If white ibises have a reliable food source, they might form larger flocks that stay put year-round near the parks," professor Sonia Altizer from University of Georgia said in an official statement.

Chestnut-crowned babbler bird sounds reveal how the elaborate language we use today emerged.
Advertisement
This shift towards more sedentary behavior could allow pathogens transmitted through feces, like salmonella, to build up and pose risks for both birds and humans, the researchers said.

Greater numbers of ibises in urban parks also puts them contact with animals they wouldn't normally meet in natural environments, like muscovy and mallard ducks, gulls and other common city birds -- all reservoirs of diseases for birds.

As part of the project, the researchers will focus on white ibises in Palm Beach County, Florida, where Hernandez has been conducting field monitoring of the birds since 2010. The findings could apply to other wildlife species that have grown cozy with humans at public parks and other human-altered landscapes.

Called the Bird Tap, this app enables Indian users to buy earthen pots from registered centers and install them at several places in their houses and streets.
Advertisement
<< Bicycle Marathon to Spread AIDS Awareness in Remote Areas
Healthy Diet may Reduce Risk of Ovarian Cancer >>

Evidence for the hearing ability in mammals, birds and reptiles was a major query for paleontologists as the eardrum was not a part of the fossil.