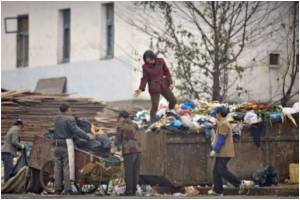 A new report suggests that the world will be able to feed the predicted 2050 population of nine billion people.

In the joint report, two French agricultural research organizations lay out findings gleaned from 2006 to 2008 that could overturn some current assumptions about the state of global farming.

An artificial chromosome for corn plants has been developed by Chicago researchers. This may speed efforts to produce fuels and medicines from plants as well as boosting crop nutrition and yield.
Advertisement

Agricultural productivity in Africa doubled between 1961 and 2003 - a finding that overturns most assumptions "and is one of the most surprising results of our work," Nature quoted Patrick Caron, CIRAD's director-general for research and strategy, as saying.


Meanwhile, Asia scored higher on productivity than in other studies, because the agencies looked at aggregate rather than independent annual yields of wheat, rice and other crops, explained Bruno Dorin, an economist at CIRAD and one of the report's authors.

Standing in her greenhouse in gumboots, Zorana Gajic jokes that she used to think food grew in supermarkets but now experiments on how to mix crops to ensure optimum use of her organic soil.
Advertisement
Another finding that has emerged is that major reserves of potential farmland exist across the globe, especially in Africa and Latin America, said Dorin.

Moreover, it is surprising that in the past 15 years, yields of wheat have stagnated in Europe and other major producing regions such as northern India, said Francois Houllier, INRA's deputy director-general in charge of scientific organization, resources and evaluation.

The conclusion is based on two assumptions. One stresses economic growth but gives low priority to the environment, whereas the other emphasizes feeding the world while preserving ecosystems.

The second scenario, based on a food intake of 3,000 kcal per person per day in all regions of the world, including 500 kcal per day of animal origin, would require an increase of 30 percent in farm output-compared with 80 percent for the first scenario-and would mean a substantial cut in food consumption in some countries and a big increase in others.

The report leaves out details on issues such as land use, biofuel and climate change, as these will be addressed in future studies by the agencies' joint interdisciplinary Agrimonde platform, which brings together a steering committee, project team and expert panel. Neither does the report make any policy recommendations.

The French National Institute for Agricultural Research (INRA) and the Centre for International Cooperation in Agronomic Research for Development (CIRAD) have published the report titled Agrimonde1.

Leading scientists have said that global food production needs to be increased by between 50 and 100 per cent if widespread famine and world starving is to be avoided...
Advertisement
Advertisement
This site uses cookies to deliver our services.By using our site, you acknowledge that you have read and understand our Cookie Policy, Privacy Policy, and our Terms of Use  Ok, Got it. Close
×