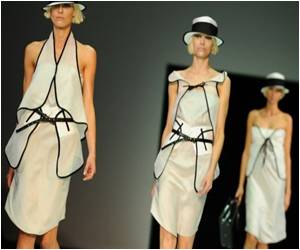 Fashion federations from around the world were helping young designers in Paris this week to avoid a nightmare scenario where you've got the clothes, the models and the venue and no one turns up.

For a promising young thing to break into the international circuit, what better place or time than the nine-day Paris shows, high point of the ready-to-wear fashion calendar.

A study on European youths and fashion revealed on Wednesday that youths are ready to spend big on their looks and share a passion for clothes .
Advertisement

This week, the fashion federations of the United States, France, Britain and South Korea had rented out space in the French capital to showcase the work of a dozen young hopefuls, help them meet buyers, suppliers and financial backers.


For the past few seasons, the influential Council of Fashion Designers of America (CFDA) has teamed up with Vogue magazine to sponsor an event dubbed "Americans in Paris", backed financially by Tommy Hilfiger.

Indian celebrity designer Rocky S suggests Britney Spears, who was reportedly criticised for her dressing sense by The X Factor co-judge Simon Cowell, should wear clothes that accentuate her curves.
Advertisement
Nine US designers will take over an ultra-chic Paris salon from Saturday to Monday for what the CFDA hopes will provide a a major boost, both in terms of press exposure and sales.

The British Fashion Council set up shop this week in a loft in Paris' trendy fourth district, for a strategic push aimed at securing export markets for its up-and-coming young designers.

"Paris is the centre of the fashion world," Woonseok Baek, director of Seoul's cultural industry department, told AFP. "If a designer can succeed here, he will succeed everywhere."

The main reason to come to Paris, he explains, is the swarm of fashion buyers concentrated in the capital during Fashion Week.

From this weekend onwards, the 10 Korean designers will each move into a Paris showroom, staying on up to two months to consolidate their market position -- all at the expense of the city of Seoul.

One of them is 34-year-old Hye-Jin Hong, in Paris for the third year running with her avant-garde label Studio K. Her last French trip translated into sales to London, Berlin, Italy -- and even Japan.

"As an independent designer it is really difficult to come to Paris," she explained. "The project is like a stepping stone to break into the market."

The French couture federation has joined the showroom trend, bringing 10 young hopefuls together within a "Designers Apartment" aimed at building bridges with buyers, suppliers and potential financial partners.

Some, like Alexis Mabille, are also showing ready-to-wear collections on the Paris runways this week. Others like Yiqing Yin or Gustavo Lins are present only in the haute couture calendar.

"It is an alternative to a runway show, less costly and more conducive to building personal contacts," said Didier Grumbach, the federation's head.

Brussels' centre for fashion and design, PAD, is also hosting a virtual runway show within the Belgian embassy, to "liven up" the collections on view in the capital's showrooms and help designers meet potential buyers.

Grumbach sees these mushrooming schemes as a sign of the ever-tougher competition in the fashion world.

"Brands have to emerge more quickly. They have no time to lose," he said.

New research has indicated that 'fashion-conscious' women in Australia are reportedly spending more on online shopping as compared to men.
Advertisement
<< Canadian Science and Technology is Healthy and Growing: Exp...
Sports Journalists Using Twitter to Promote Their Biased Th... >>