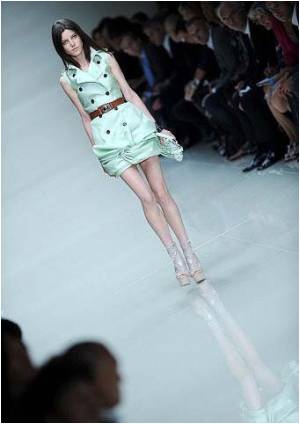 A study on European youths and fashion revealed on Wednesday that youths are ready to spend big on their looks and share a passion for clothes.

Anita Ahuja's store 'Conserve', with its colourful and trendy bags made out of recycled plastic, is surely making its presence felt.
Advertisement

Across Europe, it found the youths -- half boys, half girls -- to spend more than any other age group on fashion, with budgets steady despite the economic downturn.


Young men spent as much as their women counterparts, in sharp contrast to men over 45, whose clothes budget radically tailed off.

Fashion Critics Not Impressed by Display in London Olympics

Fashionistas keeping a keen eye on the London Olympics would have been disappointed with critics giving mixed reactions to various outfits on display.
Advertisement
"Fashion has always been vital for young people -- but today it's truer than ever," Oliver Rollet, author of a recent book on "Generation Y", commented at a round table debate following the study presentation.

"In troubled economic times, young people can find reassurance in clothes by showing which tribe they belong to," agreed the sociologist Nicolas Divert.

For the European sample, the study zeroed in on youths with an annual clothing budget of 600 euros or more -- therefore deemed to be keen on fashion -- and quizzed them about their spending habits.

Fashion was considered a budget priority on a par with food, socialising with friends and mobile phones.

All said they received varying degrees of help from their parents to buy clothes, up until they enter the job market which happens earliest in Britain, and latest in Italy where many live at home well into their 20s.

During an economic downturn, Rollet argued, "parents are likely to invest even more in their children's success, and if their children tell them clothes are vital, they'll invest in clothes as well as extra schooling."

Where do they shop? Mostly in high street chains -- Zara, H&M or Topshop -- ahead of the Internet, department stores and independent retailers. Hardly at all in second-hand or vintage stores.

"These youths see fashion was a way of expressing themselves," said Patricia Romatet, co-author of the study.

"It's part of their social life, fashion is fun, something you do with friends -- especially for girls, and especially in cities."

Yet while youths typically pride themselves on their savvy style, 82 percent simply buy the same brands as their friends.

"Your ability to master fashion will make you more or less popular -- so you're going to invest in your clothes," said Rollet. "But there's also the fear of getting it wrong, which is why so many turn to brands for reassurance."

Shipments of imported designer clothing from reputed labels such as Hermes and Versace were impounded by China after they found that the shipment contained potentially hazardous chemicals.
Advertisement
<< Biological Mechanism can Trigger Epileptic Seizures
By Playing 'Video' Game Blind People may Develop Crucial Sk... >>