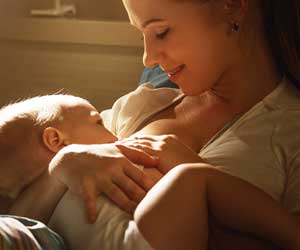 Babies who were exclusively breastfed for the first three months of life had significantly lower chances of having eczema at age six compared to their peers who were breastfed for less time or were not breastfed, reports a new study. The findings of the study are presented during the American Academy of Allergy, Asthma & Immunology 2019 Annual Meeting.

Eczema is a chronic condition characterized by extremely itchy skin that, when scratched, becomes inflamed and covered with blisters that crack easily. While genes and the environment are implicated in this inflammatory disease, many questions remain unanswered, such as how best to prevent it. According to the Centers for Disease Control and Prevention (CDC), breastfed infants have reduced risks for developing many chronic conditions, including asthma and obesity.


Balas and colleagues tapped data collected in Infant Feeding Practices Study II, a longitudinal study co-led by the CDC and the Food and Drug Administration (FDA) from 2005 to 2007, as well as the agencies' 2012 follow-up examination of that study cohort. This study first tracked the diets of about 2,000 pregnant women from their third trimester and examined feeding practices through their babies' first year of life. Their follow-up inquiry looked at the health, development and dietary patterns for 1,520 of these children at six years of age.

Painful symptoms of eczema can negatively impact the quality of life; sometimes eczema patients feel much worse than those with chronic illnesses.
Advertisement
About 300 of the children had been diagnosed with eczema at some point in their lives, and 58.5 percent of the 6-year-olds had eczema at the time of the CDC/FDA Year Six Follow-Up. Children with higher socioeconomic status or a family history of food allergies had higher odds of being diagnosed with eczema.

"Children who were exclusively breastfed for three months or longer were significantly less likely (adjusted odds ratio: 0.477) to have continued eczema at age 6, compared with peers who were never breastfed or who were breastfed for less than three months," Balas adds.

"While exclusive breastfeeding may not prevent kids from getting eczema, it may protect them from experiencing extended flare-ups."

Contact Dermatitis is a reaction of the skin in the form of skin rashes on coming into contact with certain ...

Skin types can range from oily to dry, extreme dryness accompanied by rashes and itching can often denote the ...

Find tips on how to switch toddler from bottles and sippy cups to adult cups and say bye-bye to bottle ...