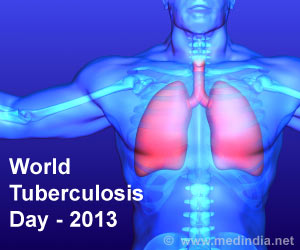 Lung lesions in an individual infected with tuberculosis (TB) are surprisingly variable and independent of each other, despite whether the patient has clinically active or latent disease, finds study.

The research could point the way to new vaccines to prevent the hard-to-treat infection.

Tuberculosis was present in Europe as early as 7000 years ago, finds a new research.
Advertisement


"It's long been thought that the patient with a weakened immune system or some other immune vulnerability was more likely to develop active disease," Dr. Flynn said. "But to our surprise, our study showed that every infected individual has a collection of granulomas, some containing live bacteria and some that are sterile because the immune system has killed all the bacteria. So in this sense, there's no such thing as a latent or active granuloma."
Advertisement
For the study, the research team infected monkeys with TB and then carefully tracked the granulomas that developed in the lungs. They determined that each granuloma starts with only one bacterium, and that bacterial replication continued for about four weeks before the body counters with an adaptive immune response to kill off the invaders.

Dr. Flynn said that this response was sufficient to kill all the bacteria and sterilize some granulomas, but bacteria persisted in others and spread to create new granulomas. You need only one granuloma to 'go bad' in order to get active TB.

Even when an animal had a severe, active infection, some of their granulomas were sterile, indicating the immune system was capable of killing bacteria, the researchers found.

The study was published in journal Nature Medicine.

Source: ANI
Advertisement
<< Researchers: Mathematics can be Perfected Only Through Prac...
Explosive Anger may Have a Cure in Aspirin >>