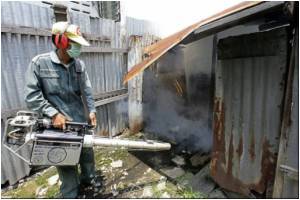 According to an official, the team led by J. Gubler of the Duke-NUS Graduate Medical School in Singapore, includes specialists from Heidelberg University in Germany, Umea University in Sweden, and Boston University in the US.


The EU has agreed to provide 1.1 million euros over the next four years to implement the project, Xinhua reported.

Due to the increasing spread of dengue in the world, the European Commission has decided to provide funding aid to set up a multi-country project in the developing countries.

The project aims to detect and identify areas with a high risk of dengue spread and identify dengue patients early. In January, over 3,000 dengue cases were reported in Sri Lanka.

More Than 12,000 Infected By Dengue in Pakistan