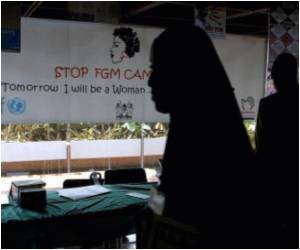 The European Union is committed to eradicating female genital mutilation. The foreign policy chief Catherine Ashton on Sunday said that this practice is an "exceptionally brutal crime".

"This is an opportunity to remind the world that the European Union condemns this abhorrent practice that severely violates the human rights and dignity of hundreds of thousands women and girls," Ashton said in a joint statement with the EU's human rights commissioner Viviane Reding marking the International Day against Female Genital Mutilation.

Female Genital Mutilation Spreads to Europe, US, With Migration

Growing migration flows have established female genital mutilation in Western countries too in recent years, the head of an international migration agency said on Friday.

With between 100 and 140 million women and girls having undergone FGM worldwide, the practice is now an issue for western nations because of immigration, according to the International Organization for Migration.


Currently a dozen European nations along with the United States, Canada and 19 African nations count among the countries with legislation against FGM.

Hundreds of British schoolgirls are facing the horrifying prospect of female genital mutilation (FGM) over the Christmas holidays, as experts warn that the practice still exists across the country.

"We believe that it is our duty to protect girls and women from the risk of mutilation and to alleviate the pain of women who live with the horrific physical and mental scars from female genital mutilation," the EU statement said, adding the bloc needed to promote measures to help eradicate the practice and protect its victims.

News Archive
News Resource
News Category
New WHO Guidelines for Malaria Treatment in Pregnancy Cervical Cancer Screening In Older Women: Necessary Or Unnecessary Home Is the Most Dangerous Place for Women Worldwide: UN Report Best Time to Get Pregnant After Miscarriage or Abortion Toxic Cooking Fumes Linked to Pregnancy Complications
More News
Sign up for Wellness Consult a Doctor Sign up for Selfcare