Female Genital Mutilation Spreads to Europe, US, with Migration 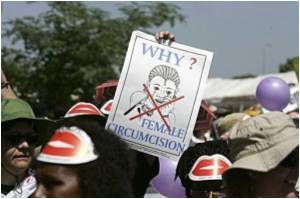 Growing migration flows have established female genital mutilation in Western countries too in recent years, the head of an international migration agency said on Friday.

"With the growth in migration in recent years, the phenomenon has unfortunately reached Europe (and) the United States," said William Lacy Swing, head of the International Organisation for Migration (IOM).


In an event to mark the international day of "zero tolerance" to female genital mutilation, Swing highlighted European Parliament estimates of 500,000 circumcised women living in Europe.


The IOM estimates that 100-140 million women and girls have suffered from the traditional practice.

Most of the victims are in Africa, with a few cases in Indonesia and Malaysia, according to the Inter Parliamentary Union, an association of world parliaments.

Nonetheless, it is on the wane in "many African countries" including Burkina Faso, Ghana and Ethiopia, according to African anti-circumcision campaign group CIAF.

"It's torture. Knives are used to cut the most sensitive part of the body," said CIAF head Berhane Ras-Work.

Circumcision Trials to Prevent HIV  More Hype Than Fact
Circumcision to prevent HIV has been given far more credence than it deserves. Like HIV, in the past circumcision was also advocated for preventing Tuberculosis and cancer.
READ MORE