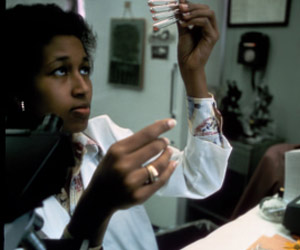 In the high-risk subgroup, a non-statistically significant trend in favor of the adjuvant arm was observed in terms of Imatinib failure-free survival. This new endpoint for the adjuvant setting, survival free from any failure of the first employed tyrosine kinase inhibitor, was designed to incorporate secondary resistance, currently the main factor adversely affecting prognosis of patients with advanced GIST.

Standard treatment for patients with gastrointestinal stromal tumors (GIST), sarcomas of the gastrointestinal wall, is surgery. Neither chemotherapy nor radiation therapy work well for these patients, but EORTC trials had shown that a targeted therapy, the tyrosine kinase inhibitor Imatinib (known as Glivec® in Europe and GleevecTM in the US), is effective in treating patients with advanced GIST. The intergroup randomized controlled phase III EORTC 62024 trial, then, took the logical next step of determining whether Imatinib would also be effective as an adjuvant to surgery in patients with local disease.


Originally, the primary endpoint for this trial was overall survival; relapse-free survival, relapse-free interval, and toxicity were secondary endpoints. In 2009, however, the Independent Data Monitoring Committee, noting the prognostic improvement of patients with advanced GIST, authorized a change in the primary endpoint to Imatinib failure-free survival. Imatinib failure was defined as the time when treatment with a different tyrosine kinase inhibitor began.
Advertisement
The results of EORTC trial 62024 will be presented Monday, 03 June 2013 at an ASCO 2013 Oral Abstract Session by Dr. Paolo Giovanni Casali of the Fondazione IRCCS Istituto Nazionale dei Tumori in Milan and Coordinator of this study.

Between 2005 and 2008, 908 patients with localized, surgically resected, high/intermediate-risk GIST were randomized to Imatinib (400 mg Imatinib daily, 454 patients) or observational (no further therapy after surgery, 454 patients) treatment arms. A total of 835 patients were eligible.

EORTC trial 62024 was an intergroup study coordinated by the EORTC in collaboration with the EORTC Soft Tissue and Bone Sarcoma Group, UNICANCER, the Italian Sarcoma Group, the Grupo Español de Investigación en Sarcomas, and the Australasian Gastro-Intestinal Trials Group and was conducted at 112 sites in 12 countries: Australia, Belgium, Denmark, France, Germany, Italy, New Zealand, Poland, Singapore, Spain, The Netherlands, and the United Kingdom. This trial was supported by an educational grant from Novartis.