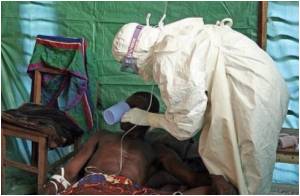 Emergency talks on the worst Ebola outbreak in history were due to wrap up with ministers hoping to halt the virus' deadly rampage in west Africa, after a jump in the number of deaths.

The highly-contagious tropical bug has infected hundreds of people in Guinea, Liberia and Sierra Leone, with the latest World Health Organization (WHO) figures showing that confirmed or suspected cases had left 467 people dead and experts fearing it could spread throughout the region.
Advertisement

Health ministers from 11 nations were due to finalise two days of talks in Accra with global experts in communicable diseases, with debate raging over the measures required to stop Ebola in its tracks.


Jeremy Farrar, a professor of tropical medicine and director of The Wellcome Trust charity, caused controversy as the talks opened as he was widely quoted in global media calling on health authorities to offer experimental medicines, not yet fully tested, to patients.
Advertisement
"Tragic as these deaths and suffering are, humans are not Guinea pigs," virologist Ian Mackay, associate professor at the University of Queensland, told AFP, rejecting the suggestion.

"It's a very difficult situation made worse by the urgency of it."

Several biotech companies and US universities are developing potential vaccines for Ebola, at various stages of testing, but none anywhere in the world is close to being licensed for distribution to the public.

"The question is: would these drugs be allowed to be used on UK citizens?" Mackay said.

"If the outbreak occurred there, or in the US, or Australia, would this be ethically acceptable in these countries?"

Ebola can fell its victims within days, causing severe fever and muscle pain, weakness, vomiting and diarrhoea -- in some cases shutting down organs and causing unstoppable bleeding.

Medical charity Doctors Without Borders, known by its French initials MSF, said last week that the spread of the virus, which has had a mortality rate of up to 90 percent in previous outbreaks, was "out of control", with more than 60 outbreak hotspots.

Ministers from Guinea, where 413 confirmed, suspected and probable cases have surfaced so far including 303 deaths, and Liberia, which has seen 107 cases and 65 deaths, are at the meeting.

Sierra Leone, which has recorded 239 cases and 99 deaths, is also represented.

In addition, officials from Ivory Coast, Mali, Senegal, Gambia and Guinea-Bissau, along with Ghana and countries as far afield as Uganda and the Democratic Republic of Congo are attending.

They have been joined by a host of UN agencies and other aid organisations, including MSF and the Red Cross, as well as personnel from disease control centres in western Africa, the United States, Britain and the European Union.

One of the biggest obstacles to combatting the epidemic, say health experts, has been traditional practices -- such as touching the bodies of victims at their funerals -- which are causing the virus to spread.

Ministers and experts have set out a strategy placing traditional village elders -- who are often more influential than foreign medical experts among the traditional forest-dwelling populations at the epicentre of the outbreak -- at the forefront of an education drive, a delegate told AFP.

"We have agreed to mobilise community leaders to be active participants in the efforts to curb the spread of the disease by building their confidence to trust the health workers who are in their communities," said Abdulsalami Nasidi, of the Nigeria Centre for Disease Control.

Source: AFP
Advertisement
<< Worlds Strongest Beer Now Available for 50 Euros
Automated Trucks to be Launched by Mercedes in the Near Fut... >>

WHO Reports Ebola Death Toll Rise to 467 in West Africa
Giving the latest update on the death toll from the Ebola outbreak in west Africa, the World Health ...

Urgent Need for Improved Diagnostic Technologies and Disease Surveillance to Tackle Ebola Outbreak in West Africa
In an open letter published in The Lancet, researchers in Sierra Leone have underlined an urgent ......

Ebola Epidemic may Last for Several Months
Possibly the worst Ebola outbreak in history is continuing its deadly rampage through South Africa ....

Drastic Action Planned Against Ebola Epidemic
A drastic action is all set to be planned against the deadliest ever Ebola virus as the epidemic ......