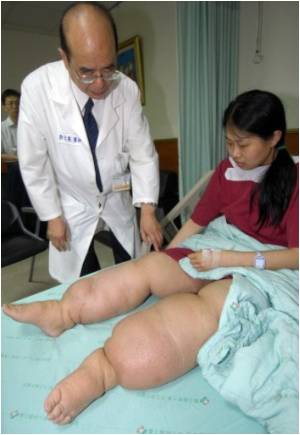 According to results of a field study in Liberia, in West Africa, where the infection is endemic, a new diagnostic test for a worm infection that can lead to severe enlargement and deformities of the legs and genitals is far more sensitive than the currently used test.

The new test found evidence of the infection - lymphatic filariasis - in many more people that the standard test had missed.

The study, the first to independently evaluate the new test, was led by researchers at Washington University School of Medicine in St. Louis and funded by the Bill & Melinda Gates Foundation.


The infection affects 120 million people living in 73 countries, leaving some 40 million profoundly disfigured and incapacitated. Both tests detect the presence of worms that cause lymphatic filariasis, a devastating mosquito-borne illness also known as elephantiasis.
Advertisement
But the new test has significant advantages over the test that has been used for more than a decade not only to diagnose the disease, but to map, monitor and evaluate the success of a massive global public health program aimed at completely eliminating the disease by 2020.

Results of the study are published May 20 in the American Journal of Tropical Medicine and Hygiene.

"The older test has had a major impact, but the new one is even better," says lead author Gary J. Weil, MD, an infectious diseases specialist at Washington University School of Medine. "Annually, medication to treat and prevent the infection is distributed to more than 500 million people worldwide. The improved sensitivity of the new test will help determine whether the mass treatment program has been effective and also identify regions that need additional attention."

An accompanying editorial by Maria Rebollo, MD, and Moses Bockarie, PhD, at the Centre for Neglected Tropical Diseases in the United Kingdom says the new diagnostic test "represents a major breakthrough for rapid diagnosis of lymphatic filariasis in the blood."

The new test also has a longer shelf life, estimated at two years without refrigeration, compared with three months for the older version, and is expected to cost less.

Weil's research team worked with colleagues at the Liberian Institute for Medical Research to conduct a side-by-side comparison of the new test strip and the currently used test. They evaluated the tests in 503 people ranging in age from 6 to 89.

Both versions of the test are manufactured by Alere Scarborough Inc. of Maine and detect the presence in the blood of a protein produced by the worm parasite Wuchereria bancrofti that causes lymphatic filariasis. The new test is performed by pricking the finger and placing a person's blood onto the test strip, which looks similar to an over-the-counter pregnancy test. Like many pregnancy tests, the lymphatic filariasis test is positive if two lines appear in the test window and negative if only one line shows.

The study's results show that the new test is highly sensitive, detecting nearly 26 percent more infections of lymphatic filariasis than the standard test (124/503 infections vs. 98/503 infections). The new test also was easier to perform and results were easier to read.

"This gives us some indication of the numbers of infections we were missing with the older test," Weil says. "On a global scale, it's a huge number of cases. We need to have an accurate test to be sure we are reaching all the people who have the disease or are at risk of developing it."

Worldwide, some 1.4 billion people are at risk of lymphatic filariasis, which is endemic in many countries in Africa, Southeast Asia and other tropical regions. Worm larvae deposited by the bite of an infected mosquito enter the body and migrate to the lymphatic system, where they mature into adult worms.

The thread-like parasitic worms can live and reproduce in the body for years. Ultimately, this damages the lymphatic vessels that drain fluid from the tissues and causes the enormous swelling and disabling deformity of the legs and in males, the scrotum.

DNA Barcoding of Mosquito Species Deployed in Bid to End Elephantiasis
New biotechnologies distinguish species based on a simple DNA analysis are being creatively ......