Electric Hookahs Might be No Safer Than Traditional Charcoal-based Ones: Study 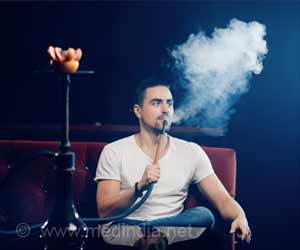 Although electrical heating elements (EHEs) were found to reduce some toxicants, they still increase others, reported researchers in ACS' Chemical Research in Toxicology.

Waterpipe tobacco smoking, otherwise known as "hookah" or "shisha," is becoming increasingly popular worldwide, especially among youth. Traditional hookahs burn charcoal as a heat source, but recently, electrical heating elements (EHEs) have been introduced to the market. Reinforced by product advertising and package labeling, many hookah smokers believe that EHEs are less harmful than charcoal.

Advertisement
‘Marketing electrical heating elements (EHEs) as safer than charcoal might be misleading. ’

In traditional hookahs, smokers burn charcoal on top of a tobacco preparation known as ma'ssel, a mixture of tobacco, glycerin, water and flavorings. The resulting smoke bubbles through water at the bottom of the pipe before being inhaled through a tube by the smoker. Previous studies have shown that charcoal contributes most of the harmful polycyclic aromatic hydrocarbons (PAHs) and carbon monoxide found in hookah smoke. Therefore, manufacturers have developed EHEs for hookahs, in some cases advertising them as "toxicant-free" or "carbon monoxide-free." Alan Shihadeh and colleagues at the American University of Beirut wanted to investigate these claims by comparing the emissions of several major toxicants from waterpipes using EHEs or charcoal.


With an automatic smoking machine, the researchers examined emissions from a hookah using charcoal or one of three commercially available EHEs as the heat source. They found that the EHEs reduced carbon monoxide and PAH emissions by 90% and 80%, respectively. However, emissions of acrolein, a highly reactive irritant thought to be responsible for nearly all non-cancer respiratory diseases in cigarette smokers, was several orders of magnitude higher with EHE use, compared with charcoal use. In addition, levels of some other volatile aldehydes were higher in EHE-produced smoke than in charcoal-produced smoke. Aerosolized particulate matter and nicotine yield were similar among the heating sources.

Hookah Smoke Can Affect Your Heart Health: Here's How
Hookah smoke contains more toxic chemicals than cigarettes, which can be harmful to the heart. ......

Waterpipe, Cigarette Smoking Up Heart Attack Risk at Younger Age in Saudi Arabians
Smoking hookah or cigarette can increase the risk of heart attack at a younger age in Saudi ......