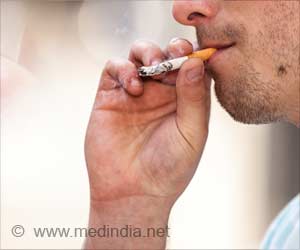 Waterpipe and cigarette smoking are linked to heart attacks at a younger age in Saudi Arabians, reports a new study. The findings of the study are presented at the 30th Annual Conference of the Saudi Heart Association (SHA 30).

Smokers have more complications and worse outcomes. Study author Dr. Farhan A.W. Khan, of King Abdullah Medical City, Mecca, Saudi Arabia, said: "In addition to cigarette smoking, water pipe smoking also called hookah and shisha is common in the Middle East due to social trends and the misconception that it is less harmful than cigarettes. More than one in ten Saudi Arabians smoke, starting at an average age of 19, while 9% of smokers start before age 15."

Advertisement
‘Smoking is a widespread health problem among Saudis as there is limited awareness about the harmful effects of tobacco. Campaigns are needed to increase awareness about the health hazards related to waterpipe and cigarette smoking, particularly in young people.’
Read More..

All types of smoked tobacco, including water pipe, increase the risk of cardiovascular disease. This study examined levels of cigarette and waterpipe smoking and outcomes in 1,554 heart attack patients presenting to King Abdullah Medical City between 2015 and 2018.


The average age at the time of heart attack was 54 years for smokers and 60 years for non-smokers - a statistically significant difference - despite diabetes mellitus and hypertension being less frequent in smokers. Smokers were more likely to have multiple arteries affected and more likely to have bigger, severe heart attacks in the form of ST-elevation myocardial infarction. Complications of heart attack, including pulmonary edema and cardiac arrest, were more common in smokers. Smokers had a trend towards higher in-hospital mortality (4.0% versus 2.4%). More than one-third (38%) of heart attack patients were current smokers.
Advertisement
Smokers were predominantly men (98%). Regarding ethnicity, 50% of Arab patients and 35% of South Asian heart attack patients were smokers. More than half (51%) of patients living in Mecca were smokers, while 30% of patients on pilgrimage were smokers.

He continued: "There is limited awareness in the Middle East about the harmful effects of smoking, and particularly about the health risks of waterpipe smoking. Tobacco products are reasonably cheap compared to the average income in Saudi Arabia. Young people in Saudi Arabia are particularly at risk of starting and continuing to smoke, and there is also a growing trend in young females."

The Saudi Ministry of Health started a national tobacco control programme in 2002 and smoking is banned in most public places.2 Tobacco packages must have health warnings and selling tobacco products to minors is prohibited. Dr. Khan said more efforts are needed to enforce smoking bans and there should be higher taxes on tobacco products. Doctors and nurses should ask about smoking at each encounter, advise to help smokers kick the habit, and refer smokers to dedicated cessation programmes. After a heart attack, smokers should be referred to cardiac rehabilitation programmes with smoking cessation services.

Dr. Khan said: "Campaigns are needed to raise awareness about the harmful effects of waterpipe and cigarette smoking, particularly in young people so that they never take up the habit. People of all ages can improve their health and reduce their risk of heart problems if they quit smoking."

Dr. Fayez Bokhari, head of the Scientific Committee of SHA 30, said: "Saudi Arabia has made great progress in tobacco prevention including a ban on all forms of smoking advertising, a ban on smoking in public places and new added taxes on tobacco products; this is in addition to active educational campaigns. Despite all these efforts, smoking is still a major health problem with a huge burden on the economy. Data from The Ministry of Health of Saudi Arabia indicates that smoking kills 71 men and 21 women every week in Saudi Arabia along with 4,545 million Saudi Riyals in tobacco related-costs to the government."

Professor Marco Roffi, course director of the ESC programme at SHA 30, said: "Smoking can be lethal not only because of heart attacks but also stroke and cancer. Smoking is particularly dangerous in association with diabetes, a condition with high prevalence in the Middle East. The ESC prevention guidelines recommend no exposure to tobacco in any form. People who stop smoking generally halve their risk of cardiovascular disease. ESC advice to reduce smoking includes higher taxes and prices on all tobacco products, banning smoking in public places, and prohibiting sales of tobacco products to adolescents."

Source: Eurekalert
Advertisement
<< Catching Up Some Midday Napping Linked to a Drop in Blood Pr...
50 is the New 40 for Safe Childbirth, Say Researchers >>

Gene Variation Linked to Cardiovascular Disease in Smokers Identified
A gene variation was found to be linked to smoking and cardiovascular disease risk, based on the ......
Second Hand Smoking or Passive Smoking  A Killer Too!
Everyone is exposed to passive smoking during their lifetime. Inhalation of harmful tobacco ......
Smoking Increases Not only Risk for Prostate Cancer But Smokers During its Treatment Fare Worse than Non-smokers
Cigarette smoking is a risk factor for aggressive prostate cancer though it is not yet thought to .....