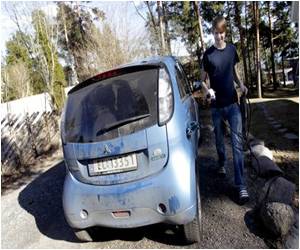 Germany is ranked the most fuel-efficient country on the planet and Germans are mad about cars, but when it comes to electric vehicles, Europe's top economy is in the slow lane.

And moves by the government last week to try to jump-start public interest in the technology are unlikely to change much, experts say.

Thousands of Norwegians have switched to electric cars following the example of their crown prince, taking advantage of strong and somewhat controversial government incentives.
Advertisement

In 2009, Chancellor Angela Merkel set an ambitious target for one million electric cars to be on the road in Germany by 2020, and this in a country where some motorways are free of any speed limit.


"We're confident that we'll reach that goal," Transport Minister Alexander Dobrindt said as recently as last week when he launched a number of new electromobility initiatives.

Wirelessly Charging Your Electric Cars Will Soon Become A Reality

A Japanese car maker has started field trials with a wireless charging system.
Advertisement
But for Ferdinand Dudenhoeffer, expert at the CAR Center for Automotive Research at Duisburg-Essen University, the target was totally unrealistic.

Electric cars are already exempt from road tax for a period of 10 years, but that appears to have provided little incentive so far, so the government unveiled new draft legislation last week aimed at giving the sector a boost.

Under the initiatives, electric cars would be allowed to use inner-city bus lanes. They would also be able to park free of charge, and parking spaces close to recharging stations would be reserved exclusively for electric cars.

However experts believe such initiatives do not go far enough, not least because they are in the hands of the municipal authorities.

"Lots of towns and cities remain sceptical," not only about the idea of free parking, but also opening up bus lanes to electric cars, since that could slow down buses, said Stephan Articus of the Association of German Cities.

The head of the VDA auto industry association, Matthias Wissmann, believed the measures "aren't enough and need to be followed up further with tax breaks for electric cars".

The National Platform for Electromobility, an advisory panel for the government made up of representatives from industry, research, politics and unions, has long called for tax cuts for companies that have an electric car in their fleet.

So far, however, the governing coalition government has ruled out any form of financial aid, including possible bonuses for private car drivers.

"The government is not acting because German carmakers aren't sufficiently advanced in this technology," said Valerie Wilms, transport spokeswoman for the ecologist opposition Greens.

"They don't want to favour (foreign carmakers such as) Renault or Tesla over Mercedes," Wilms said. Renault is a French company, and the US Tesla company has developed an electric sports car.

"The government must introduce incentives for people to buy electric cars," as was the case in France or the United States.

"If they don't, electromobility will remain a niche sector."

Germany, on the other hand, was named the world's most energy-efficient nation last month by the American Council for an Energy-Efficient Economy which commended its codes on buildings.

Nonetheless, German carmakers are slowly beginning to get their act together.

Daimler has launched an electric version of its about-town Smart car; Volkswagen has unveiled electric versions of its Mini and Golf models; and BMW is playing the high-end card with its i3 model.

The market is proving slow to get started, however, BMW conceded.

But is it because there are not sufficient recharging stations, or is the range of cars simply not attractive enough?

"It's the classic problem of the chicken and the egg," said a BMW spokeswoman.

Germany has a paltry 4,400 recharging stations, while France hopes to expand its network to 16,000 by the end of the year.

The national power companies are also hoping to capture their share of the market, but each offers its own recharging system meaning drivers whose car battery is running low need to find a compatible system.

And the latest initiatives by the government tackle none of those problems, he said.

A study says that the pollution levels are worse with electric cars than petrol-powered vehicles even though electric cars are heralded as an environment friendly solution.
Advertisement
Advertisement
This site uses cookies to deliver our services.By using our site, you acknowledge that you have read and understand our Cookie Policy, Privacy Policy, and our Terms of Use  Ok, Got it. Close
×