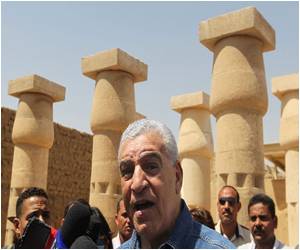 Officials have confirmed that a vast necropolis with some 50 mummies has been discovered in the famed Valley of the Kings near the temple city of Luxor, Egypt.

"The immense necropolis contains the remains of mummies that could have been members of the royal family, in particular the sons of the kings Tutmoses III and Tutmoses IV of the 18th dynasty," which ruled from 1550-1292 BC, the antiquities ministry said.

Archaeologists, including experts from the University of Basel in Switzerland, found wooden sarcophagi, death masks and canopic jars used to store organs removed during the embalming process. The mummies included newborn babies.


An examination of the inscriptions on the jars allowed them to identify more than 30 of the dead by name, including previously unknown princesses, Antiquities Minister Mohamed Ibrahim said in the statement.

The cemetery, which like many such sites had been looted in ancient times, is in the extreme northwest of the Valley of the Kings, a popular tourist site which also includes the tomb of Tutankhamun, better known as King Tut.

Source: AFP
Advertisement
<< Honoring the Holocaust Victims: Thousands March at Auschwit...
US Sports Still in the Grip of Racism >>

Unrest in Egypt, Boon for Spain
As British, German and French holidaymakers packed its beaches at a time of unrest in Egypt and ......