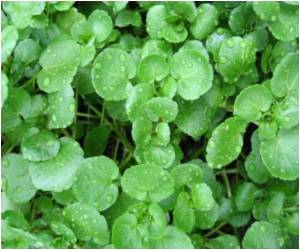 Eating a portion of watercress every day could help prevent breast cancer, according to a new research.

Researchers at the University of Southampton say that the vitamin-packed salad veg may provide one of the first natural defences against the disease.

They found that a cereal bowl-sized helping of the superfood triggered changes in blood cells that blocked tumour formation.


The chemical in watercress that makes it taste peppery - phenyethyl isothiocyanate, or PEITC - prevented cell damage.

The substance, previously shown to cut cancer risk for smokers, stayed in the blood for days after watercress was eaten.

Superfoods should be a part of daily diet as they are packed with nutrients and healing properties.But the best part is that they are tasty too!
Advertisement
Researchers had not initially expected watercress to work so well against breast cancer.

They decided to test it on 12 women with the condition only after watercress solution proved effective against cancer cells in laboratory tests.

The women were each asked to eat 80g packets - the size often sold in supermarkets - and were tested over time.

"Our research takes an important step towards understanding the potential health benefits of this crop," the Sun quoted Professor Graham Packham, who led the two-year study, as saying.

"It shows that eating watercress may interfere with a pathway that has already been tightly linked to cancer development. This is not a cure for cancer but may well help to prevent the disease."

He added: "We need to follow this research with larger scale studies. Understanding the risk factors for cancer is a key goal and studies on diet are an important part of this.

"Relatively little work is being performed in the UK on the links between the foods we eat and cancer development."

Watercress, which is high in vitamin C, zinc and iron, has been shown to fight infections.