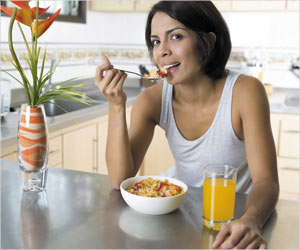 Eating a fibre-rich breakfast consisting of muesli and enough fruit and vegetables throughout the day everyday can help maintain a rich variety of bacterial species in the gut, which may have positive influence on chronic inflammatory joint diseases, and prevent bone loss, a study has found.

The findings, led by researchers at the Friedrich-Alexander-Universitat Erlangen-Nurnberg (FAU) in Germany, showed that a healthy diet rich in fibre is capable of changing intestinal bacteria in such a way that more short-chained fatty acids, in particular propionate, are formed.

Advertisement
‘Eating a fibre-rich breakfast consisting of muesli and enough fruit and vegetables throughout the day everyday can help maintain a rich variety of bacterial species in the gut.’

Short-chained fatty acids are important for the body as they provide energy, stimulate intestinal movement and have an anti-inflammatory effect.


"We were able to show that a bacteria-friendly diet has an anti-inflammatory effect, as well as a positive effect on bone density," said lead author Mario Zaiss from the FAU.
Advertisement
"We are not able to give any specific recommendations for a bacteria-friendly diet at the moment, but eating muesli every morning as well as enough fruit and vegetables throughout the day helps to maintain a rich variety of bacterial species," Zaiss added.

In the study, published in Nature Communications, the team focussed on the short-chain fatty acids propionate and butyrate, which are formed during the fermentation processes caused by intestinal bacteria.

These fatty acids can be found, for example, in the joint fluid and it is assumed that they have an important effect on the functionality of joints.

The researchers also proved that a higher concentration of short-chained fatty acids, for example in bone marrow, where propionate caused a reduction in the number of bone-degrading cells, slowing bone degradation down considerably.

"Our findings offer a promising approach for developing innovative therapies for inflammatory joint diseases as well as for treating osteoporosis, which is often suffered by women after the menopause," Zaiss noted.

Jawbone Loss Caused by Periodontitis Predates Rheumatoid Arthritis
Jawbone loss caused by inflammation is characteristic to both periodontitis, a disease leading to .....

Obesity is a Major Risk Factor for Osteoarthritis
The knee joint is a common site of osteoarthritis, a degenerative joint disease that affects more .....

Physiotherapy for Arthritis
Physiotherapy enables patients with debilitating disease to regain loss of function in their muscles...