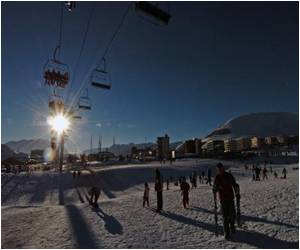 An official statement revealed that several pistes at French ski resort Alpe d'Huez, one of Europe's top skiing venues, will open at the weekend, three weeks earlier than planned after abundant snowfall.

The five ski pistes of about 10 kilometres (six miles) are located on a local glacier at an altitude of between 2,600 and 3,300 metres (8,500 to 10,800 feet). They will now be open every weekend up to December 6 when the season was originally scheduled to start.

"Conditions on the glacier are excellent," said Fabrice Hurth, head of the local tourist office. "It is rare that we open this early in such good conditions."


Alpe d'Huez, in the northern French Alps, expects more snow overnight Thursday to Friday with up to 40 centimetres (1.3 feet) of powder in areas over 1,500 metres (5,000 feet).
Advertisement
A bumper winter for snow in the Alps and Pyrenees had helped France retain its crown as the world's top skiing destination, figures published in September showed.

Piste-bashers racked up a total of 57.9 million days skiing over the 2012-13 season, a rise of 4.9 percent on the previous season.

The United States trailed in second place with 56.9 million days spent on the slopes, a rise of 11.7 percent.

The United States was the traditional holder of the top position until being dethroned by France last year.

Club Med Cashes in on China's Skiing Craze
French leisure group Club Med has opened its first resort in China and hopes to take advantage of .....

Skiing Linked to Increased Risk of Arrhythmias
Higher incidence of arrhythmias (heart rate or heart rhythm disorder) is seen among skiers with a .....

Duchess of York Bans Family From Skiing To Save Themselves for Royal Wedding!
The Duchess of York has banned her daughters from taking their annual family skiing holiday as she ....