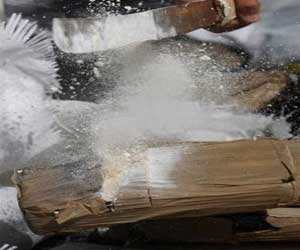 Cocaine, the notorious white powder illegally snorted, injected or smoked by nearly 2 million Americans, a new study on cocaine details how it may permanently damage proteins in the body.

That information, gleaned from laboratory tests, could be used to potentially detect the drug in biofluids for weeks or months  instead of days  after use, say scientists. The findings, which appear in the ACS journal Chemical Research in Toxicology, could also help explain cocaine's long-term health effects.

Anthony P. DeCaprio and colleagues explain that prescription and over-the-counter drugs intended for legal medical use undergo rigorous studies to determine how they work and how they might cause side effects. But there are very few similar studies on illicit drugs. Long-term use of the so-called rich man's drug is linked to depression, breathing problems, kidney diseases and sudden death. Researchers already knew that cocaine abuse can alter proteins in the body, but the exact details of how it makes these changes were not known. DeCaprio's team stepped in to investigate this mystery.


In laboratory tests, they discovered a brand-new way that cocaine breaks down and alters proteins. They speculate that these proteins could appear in users' biofluids for weeks or months after the drug is first taken. This finding could dramatically expand the window for determining past cocaine use, which currently is only detectable for up to several days. Also, the new details on cocaine metabolism contribute to a more comprehensive picture of the drug's toxic effects.

Pulmonary Arterial Hypertension
It can be a serious condition affecting the heart. It is defined as mean pulmonary arterial ......

Oreos Cookies may be as Addictive as Cocaine, Study Suggests
Researchers suggest that Oreos cookies produce a similar effect on the brain and may be as ......

Cocaine Dependence Could Be Treated By Anti-epileptic Drug: Study
Topiramate, a drug approved by the US Food and Drug Administration (FDA) to treat epilepsy and ......