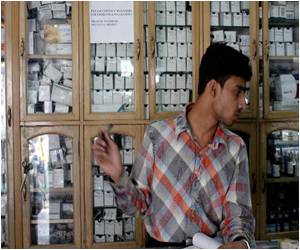 In a deal aimed at slashing the US giant's tax bill, Shire Pharmaceuticals has accepted a £32-billion ($54-billion, 40-billion-euro) takeover bid from AbbVie, the two companies announced on Friday.

The takeover, priced with a 53.0-percent premium for Shire stock, comes after Shire, based in Ireland, reversed its opposition to a deal earlier this week.

"The boards of AbbVie and Shire are pleased to announce that they have reached agreement on the terms of a recommended combination of Shire with AbbVie," the two firms said in a statement.


The offer, comprising £24.44 in cash and 0.8960 AbbVie share per Shire share, is the same as the proposal received by the group last Sunday.

The companies added that the bid was worth the equivalent of £53.19 per Shire share, which represents a premium of 53 percent to the closing share price on May 2, one day before AbbVie's initial proposal.
Advertisement
The deal was expected to reduce AbbVie's effective tax rate to about 13 percent by 2016, according to the statement.

AbbVie stressed that it will "maintain a strong commitment" to growing the shareholder dividend and implementing a "significant" share repurchase scheme.

Shire Pharmaceuticals, which is listed in London and New York but based in Dublin, is a specialist in drugs for the treatment of attention-deficit disorder and rare diseases.

Shire shareholders will own approximately 25 percent of the combined company following completion of the takeover.

Shire, which provides treatments in areas such as rare diseases and neuroscience and is developing products in other therapeutic areas, had previously rejected offers from AbbVie as undervaluing the company.

The group had also previously highlighted concerns over AbbVie's plans to make Britain its home base for tax purposes.

Stricter Pharmaceutical Patents Could Reduce Access to Affordable Drugs for the Poor
The American government's plans to adopt stricter pharmaceutical patents at the ongoing talks on a ....

Japanese Pharmaceutical Company Starts Down's Therapy Test
A pharmaceutical company in Japan said it will begin therapeutic testing of a drug it hopes will ......