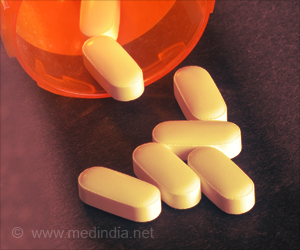 Cachexia or wasting syndrome is a condition of rapid weight loss, muscle atrophy with severe physical weakness. It is common among patients with long-term diseases like cancer, heart failure and AIDS.

"Our goal is to understand more comprehensively how cachexia develops and to explore the activity of drugs capable of slowing the process down," said Miguel Luiz Batista Junior, a professor at the University of Mogi das Cruzes (UMC) in Brazil and the principal investigator for the study.


According to Batista, previous research has shown that a process of adipose tissue remodeling known as browning occurs in patients with cachexia and that browning significantly contributes to the rapid loss of weight and fat.
Advertisement
Through experiments with mice, researchers at the Adipose Tissue Biology Laboratory of UMC identified a key protein in this process and showed that atorvastatin can attenuate its effects.

Funding was awarded by the National Council for Scientific and Technological Development of Brazil (CNPq, an agency of the Ministry of Science, Technology, Innovation and Communications), Serrapilheira Institute, as well as FAPESP.

Batista explained that white adipose tissue stores fat when surplus energy is available, while the main function of brown adipose tissue is thermoregulation and insulation.

For this reason, in winter, it is important to eat more food or choose meals with a higher calorie content because brown adipose cells turn fat into body heat and regulate body temperature.

Brown adipose cells are not the only cell type that can burn fat for thermoregulation. At times of intense cold, beige adipose cells may also go into action via the browning of white adipose tissue. The structure and function of the cells change during this process. They continue to store excess energy but prioritize fat burning to assist in thermoregulation.

"In patients with cachexia, white adipose cells are transformed into beige cells. This is curious, since, in theory, the organism of a debilitated individual doesn't benefit from a reduction in fat reserves," Batista said.

The physiological role and consequences of the browning process induced by cachexia are unknown. "This is one of our study's two major contributions," Batista said.

TLR4 (toll-like receptor 4) is a protein that plays a key role in pathogen recognition, innate immunity activation and inflammatory responses. Because obesity, similar to cachexia, is associated with systemic inflammation, the authors of the study suspected that TLR4 might be linked to adipose tissue remodeling. "We set out to associate the action of TLR4 with cachexia," Batista said.

In a mouse model, the researchers used both genetic ablation and pharmacological inhibition of a receptor similar to human TLR4. They next induced lung cancer in genetically modified mice (without TLR4) and in control wild-type mice (with TLR4).

"We found that 28 days after the inoculation of cancer cells in their lungs, the wild-type mice with TLR4 had lost 12% of their body weight, a classic sign of cachexia," Batista said. Cachexia was less severe in mice without TLR4. "These animals lost less weight and muscle mass. They also lived longer, even though tumor growth was the same as in the control group. It's also important to note that no lung metastasis was detected among the genetically modified mice," Batista said.

An analysis of adipose cells from the two groups showed that browning had occurred in the control mice with TLR4. This process likely led to accelerated weight loss. "Adipose tissue was less altered in the genetically modified mice without TLR4. In other words, lack of the receptor significantly blocked the adipose tissue browning effect," Batista said.

Atorvastatin is an inexpensive drug widely used to control cholesterol. Research performed in recent years has described the anti-inflammatory effects of atorvastatin, including the downregulation of TLR4 gene expression.

The authors of the study decided to use a preclinical model to determine whether atorvastatin affects the development of cachexia in wild-type mice with TLR4 in a similar manner to its effect on genetically modified mice without TLR4. They induced lung cancer in two groups of wild-type mice. In the group not treated with atorvastatin, tumors developed, and symptoms of cachexia were observed.

In mice treated with atorvastatin, the result was even better than that in genetically modified mice without TLR4.

"With regard to the prospects for treatment of cachexia, the results of the genetic and preclinical models were highly promising. We expect these results to encourage researchers to test the clinical use of atorvastatin in patients with cancer."

In a vast majority of cases, cachexia is associated with the terminal stage of chronic diseases. In 20% of these terminal patients, cachexia is the cause of death. Among patients with pancreatic, lung and gastrointestinal tumors, cachexia is observed in 60%-80% of cases.

"Cachexia is irreversible once established. In cancer patients, the development of cachexia usually shows that death is approaching. The patient's extreme debilitation almost always obliges the medical team to reduce medication or even to suspend radiation therapy or chemotherapy," Batista said.

"The cancer doctor's priority isn't to treat cachexia but to attack the tumor. However, knowing the causes of this severe metabolic syndrome can help us discover drugs that attenuate its effects and mitigate its tendency to prevent the continuity of oncological treatment."

Source: Eurekalert
Advertisement
<< Scientists Identify the Origin for Chronic Pain in the Body
Study on the Influence of Probiotics in Human Gut Microbiota >>