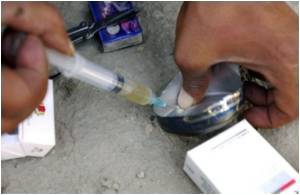 Drug addiction, one of the serious problem in Russia has left around 2.5 million Russians as drug addicts, says Russian President Dmitry Medvedev.

Speaking at a government meeting in the Siberian city of Irkutsk, identified by officials as a particular trouble spot for abuse, Medvedev said that no fewer than 2.5 million Russians are drug addicts.

The president said the problem was costing Russia between two and three percent of the gross domestic product and that the country may have no option but to resort to drug testing in schools.


Medvedev, who is usually regarded as one of the more liberal of Russian leaders, said that testing may need to be put into law at a later stage.

Drug detoxification (or drug detox) is a process that helps drug addicts to give up drugs with less or no withdrawal symptoms.
Advertisement
"Unfortunately, the situation is such that we will have to go along this path," Medvedev said.

That move is bound to cause controversy and many officials at the meeting tiptoed around the issue, warning the Kremlin chief against any hasty measures.

"We support the testing as one of the instruments of early detection of drug use," Viktor Ivanov, the Federal Drug Control Agency, said, adding however it remained to be seen whether or how the country could make that testing obligatory.

Following the debate, Medvedev said officials should develop a system of tests for schools that could find a way to detect addiction at an early stage.

"In principle, I will be fine with any option," he said, tasking officials with putting together a two-tier system starting with voluntary testing which may be followed by obligatory screening at a later stage.

Medvedev said some 70 percent of drug abusers were under 30, many addicts were becoming increasingly younger and were now in their early teens.

"Narcotics affect the demographic situation in the country on the whole and destroy the nation's gene pool, people's health," he told officials.

Due to its proximity to Afghanistan and its porous borders, Russia is among the world's top three heroin consumers along with Iran and Pakistan, according to the drugs control agency.

Officials estimate that around 100 people die of drug abuse every day in Russia.

Medvedev spoke after he met with mothers of current and former drug addicts in the city, saying the topic of drug abuse still made Russian society uncomfortable and most preferred to sweep it under the carpet.

"This topic used to be taboo, which should definitely be broken," he told the Mothers against Narcotics Association, a regional advocacy group.

"Genocide is under way, the nation is being destroyed," said the association's chairwoman Valentina Chervichenko.

Another activist, Alla Chernyavskaya, said Russians still considered drug addiction a vice rather than an illness which discouraged addicts' families from seeking help.

"Society's position rests on fear and prejudice," said Chernyavskaya, whose son Dmitry, now 30, was a heroin addict for several years.

She said she was so afraid of telling anyone that she tried to help him kick the habit herself.

Her methods included leaving him to live in a tent in the Siberian taiga and chaining him. He was able to go under treatment and stopped using heroin in 2006 after she finally sought outside help.

Drug Abuse Screening Test (DAST) is a screening test to find out if you need professional help with 'Drug Abuse' problem. This is only an anonymous self test.
Advertisement
<< Bullying Behavior More Acute in Girls Than in Boys
Supreme Court Bans Child Labour in Circuses >>