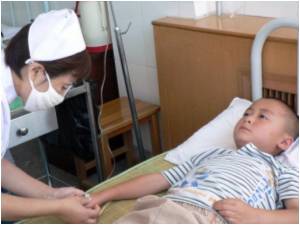 Research says that a nutrient found in egg yolks, liver and cauliflower taken by mothers during pregnancy and nursing may offer lifelong "dramatic" health benefits to people with Down syndrome.

A new study done at Cornell University and published June 2 in the peer-reviewed journal Behavioral Neuroscience found that more choline during pregnancy and nursing could provide lasting cognitive and emotional benefits to people with Down syndrome. The work indicated greater maternal levels of the essential nutrient also could protect against neurodegenerative conditions such as Alzheimer's disease.

Down Syndrome is a congenital disorder among children commonly born to older mothers. The condition is also known as 'Up syndrome' because of the cheerful persona of the Down children.
Advertisement

"We found that supplementing the maternal diet with additional choline resulted in dramatic improvements in attention and some normalization of emotion regulation in a mouse model of Down syndrome," said lead author Barbara Strupp, professor of nutritional sciences and of psychology.


In addition to mental retardation, Down syndrome individuals often experience dementia in middle age as a result of brain neuron atrophy similar to that suffered by people with Alzheimer's disease. Strupp said the improved mental abilities found in the Down syndrome mice following maternal choline supplements could indicate protection from such neurodegeneration "in the population at large."

Encyclopedia section of medindia gives general info about Genetic counseling
Advertisement
Strupp and her co-authors tested Down syndrome-model mice born from mothers that were fed a normal diet versus those given choline supplements during their three-week pregnancy and three-week lactation period. They also examined normal mice born from mothers with and without additional choline. The choline-supplemented mothers received about 4.5 times more choline (roughly comparable to levels at the higher range of human intake) than unsupplemented mothers.

Beginning at 6 months of age, the mice performed a series of behavioral tasks over a period of about six months to assess their impulsivity, attention span, emotional control and other mental abilities. The researchers found the unsupplemented Down syndrome-model mice became more agitated after a mistake than normal mice, jumping repeatedly and taking longer to initiate the next trial. The choline-supplemented Down syndrome-model mice showed partial improvement in these areas.

"I'm impressed by the magnitude of the cognitive benefits seen in the Down syndrome-model mice," Strupp said. "Moreover, these are clearly lasting cognitive improvements, seen many months after the period of choline supplementation."

Strupp said the results are consistent with studies by other researchers that found increased maternal choline intake improves offspring cognitive abilities in rats. However, this is the first study to evaluate the effects of maternal choline supplementation in a rodent model of Down syndrome.

Previous studies of humans and laboratory animals have shown that supplementing the diets of adults with choline has proven to be largely ineffective in improving cognition."Although the precise mechanism is unknown, these lasting beneficial effects of choline observed in the present study are likely to be limited to increased intake during very early development," Strupp said.