Disillusionment for Europeans and Their Money 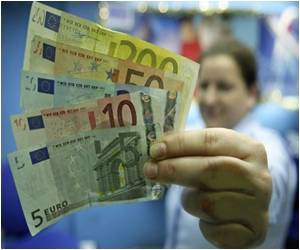 On the streets of Berlin, Madrid, and Bratislava, the view is similar: despite its clear upsides, the transition to the euro hiked the cost of living even as it introduced deep political and economic uncertainty in the bloc.

The concept of social health insurance is deeply ingrained in the fabric of healthcare systems across the European continent.
Advertisement

The euro, the most tangible manifestation of European integration in everyday life, has become a symbol of the debt crisis and the economic downturn.


"Since we rolled out the euro in France, we gave up our purchasing power," fumes Viviane Vangic, 37, in the Paris city centre.

Eighty-five percent of Germans believe that the euro has pushed up prices, according to a recent survey.

A US study that has stressed the importance of measuring rates of rehospitalisation following percutaneous coronary intervention (PCI) procedures has been welcomed
Advertisement
And Maria Angeles in Madrid says that "when we went to the euro, what used to cost 100 pesetas now costs a euro" or 160 pesetas.

Although the statistics do not bear out this impression, showing about two-percent inflation each year over the last decade, the accusation of a built-in price hike is widespread among those who remember their old currency.

This is particularly true among the newcomers to the euro.

"All the prices have gone up since we adopted the euro. It has always been hard for pensioners to make ends meet," says Elena, a 72-year-old in Bratislava, Slovakia, which adopted the euro in 2009.

"But now young families are also struggling to make a living."

Younger Europeans, who are suffering from disproportionately high unemployment in many countries, have little memory of their national currencies and take the euro for granted.

"I don't even know to convert anymore. I count in euros," said Stephanie Jordan, a 23-year-old Parisian.

"I am committed to the euro -- since I've been spending money it's been in euros," said Ann Hillig, a 24-year-old in Berlin.

For her the mighty deutschmark, for which Germans profess their love in poll after poll, is now a distant memory.

Hillig says she hopes that the euro has a bright future ahead of it and finds it "exciting to flip over coins and say,'oh, this one comes from there or there'," she said, referring to the national symbols from each of the 17 member states on the back of every euro coin.

Moving from one country to another with the same bills and coins is generally seen as one of the great strengths of the euro, eliminating the expense, inconvenience and waste of converting currencies. But tough economic times have diminished that advantage.

"You don't have to change money when travelling but now I don't travel anymore because it's expensive," says Rodny Kamil, 29, a fish seller in Bratislava.

"My life has got more difficult since the euro adoption but not only the currency, also the times have changed. With the euro, I have a feeling that I can buy less for the same amount of money than I could a few years ago. So in order to buy what I need, I have to work more."

His compatriot Jano Bosansky, a 50-year-old entrepreneur, is sceptical about the future of the eurozone.

"We are saving richer indebted member states, lending money to them," he said. At the same time "we are a cheap workforce and everything is more expensive."

In Spain, 70 percent of citizens believe that the euro does them little or no good, according to a recent survey.

But in Greece, epicentre of the debt crisis, nostalgia for the drachma has not yet taken hold.

"If we returned to the drachma we would fall into poverty, it makes no sense, really," says Angeliki, a retired Athenian.

Kerstin Bode-Rau, a German lawyer in her 40s, found that "the euro has strengthened cohesion in Europe, it forces us to work together."

But she admits feeling a "rational" attachment to the European common currency, compared to the more emotional link she had to the deutschmark of her youth.

And within the EU, the euro is hardly the envy of the periphery.

The British are less interested than ever and elsewhere, the eagerness to join the club is curdling. For the first time since 2005, more Lithuanians now say they are opposed to the euro than support it, according to a recent survey.

Roche has revealed that the European Commission has approved the use of Avastin for treating women with early and advanced form of ovarian cancer.
Advertisement
<< Google Tops 2011's Most Visited Site in US
David Camerons Pledge to Guard Kids from Lewd Ads >>

Disillusionment for Europeans and Their Money Personalised Printable Document (PDF)