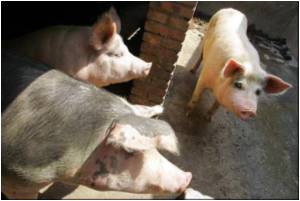 Eight officials in China have been dismissed after pork from pigs infected with a "highly contagious virus" was found to have entered the market, state media said Monday.

The country's latest food scandal was revealed in an investigation by state broadcaster China Central Television which said the annual revenue of the tainted pork was more than 20 million yuan ($3.2 million).

Flu Virus Can Spread Up to 6 Feet Above the Patient

The influenza virus can spread to 6 feet from a patient through submicron particles breaking the old thought that it spreads only through coughing and sneezing.
Advertisement

The meat had come from slaughterhouses in the city of Gaoan in central Jiangxi province and had entered at least seven provinces in total, said the report, which was first broadcast Saturday.


"Some of the pigs had a highly contagious virus," added the report, which contained grisly images inside slaughterhouses of scattered pig carcasses, many with their bellies cut.

Norovirus or winter vomiting bug, the virus that spoils your vacation, is the leading cause of food-borne disease and a major cause of food contamination.
Advertisement
The state-run China Radio International (CRI) said Monday: "Eight officials... have been dismissed for negligence, over sales of pork from pigs that were sick, or had already died."

A report by state news agency Xinhua said the dismissed officials work in "animal husbandry and commerce authorities" in Gaoan.

CRI also quoted an official from Gaoan saying 12 suspects had been detained while an "illegal slaughtering site" had been destroyed and another sealed. It did not say whether the eight dismissed officials were included in this figure.

The city is one of China's major pork producers with more than two million pigs slaughtered every year, reports say. The meat is a staple in the Chinese diet.

Poor food safety is a major concern in China, where standards are lax and scandals involving tainted products are common.

China was rocked by one of its biggest-ever food safety scandals in 2008 when the industrial chemical melamine was found to have been illegally added to dairy products, killing at least six babies and making 300,000 people ill.