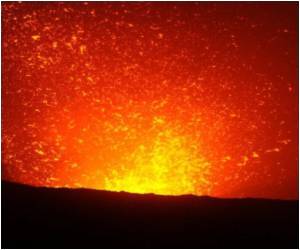 Javanese villagers who survived the violent eruptions of Mount Merapi volcano last year are tapping into the macabre market for disaster tourism to help rebuild their shattered lives.

Suwarni lost her house and father-in-law when the volcano burst into life in October and November, killing more than 350 people in searing rivers of lava, ash and gas that swept across the surrounding countryside.

Government assistance was scant and with little prospect of employment the 26-year-old mother started selling video CDs of the disaster to tourists who have been flocking to the mountain north of Yogyakarta.

"I have no choice. Although it's difficult for me, I have to get over it and bring some money to my family."

The Red Cross director for Africa has said that climate change disasters on the African continent have raised the need for an humanitarian response
Advertisement
Tourists from around Indonesia and the world have been coming to Merapi to see the devastation first-hand since the threat level was downgraded in December, officials said.

The eruptions were the biggest since 1872 and the 2,970-metre (9,740-foot) peak is still rumbling deep within its molten core. The official alert level now stands at "vigilant", but the eruptions have stopped.

Almost 400,000 people who spent weeks in emergency shelters have returned home, many finding nothing but ash or mud where their villages once stood.

The scene is still one of utter devastation, especially on the southern slopes where pyroclastic flows of gas and debris caused most of the destruction.

Burnt trees and car wrecks litter the area around Suwarni's village of Kinahrejo, about four kilometres (2.5 miles) from the summit. The once-picturesque village is gone, buried under a moonscape of black earth.

Suwarni's family kept dairy cows before the disaster. Now she sells her videos for about 40,000 rupiah ($4.40) each and makes just enough to get by.

Dutch tourist Hans Van Der Weide, 62, said he could barely believe how the landscape, once lush and green, had been transformed.

"I wanted to see the impact of the eruptions because I'd been here before... It's unbelievable that everything here has been destroyed," he said.

US geography student Kyle Miller, 21, said he didn't expect to see so many other tourists.

"I was surprised to see so many people on the mountain and walking around in the ruins... I saw what seemed to be thousands of people arriving to simply see an area of devastation," he said.

"I hope that the money being generated by parking fees, as well as souvenir and food sales, will somehow benefit the community and speed up the process of rebuilding the lives of the locals who lost so much."

The old man, appointed by the sultan of Yogyakarta to tend to the volcano's restive spirits, ignored warnings to evacuate his home and died in the first seconds of the first eruption. His sacrifice has become local legend.

One of his daughters, Panut, 59, now sells cigarettes, instant noodles and drinks to tourists.

Even before the eruptions, Marijan's house was a popular attraction for curious visitors. Panut said visitor numbers had tripled since his death as people come to pay their respects or simply gawk at the destruction.

"Although a lot of tourists come here I'm still poor because my house was destroyed," she said.

"The government has to give us new homes."

Indonesian day-tripper Cahyo Sunarko, 22, from the Javanese town of Magelang, said he was offended by tourists who came to Merapi only for leisure.

"You can see that everything here has been devastated. It's a perfect area for reflection that God can take away anything in seconds," the student said.

Merapi is not the only disaster zone in Indonesia that is popular with tourists.

The mud volcano known as "Lusi" also attracts a lot of visitors to Sidoarjo district in East Java province, where the geyser began oozing from the bowels of the earth on May 29, 2006.

The mud -- a hot, bubbling, grey substance the consistency of wet concrete -- has already wiped out 12 villages, killed 13 people and displaced more than 42,000.

A new survey has shown that millions of people in the devoutly Catholic Philippines believe God is punishing humans for their evil deeds by inflicting environmental catastrophes on them.
Advertisement
<< Cancer Tumors Can Be Located in Just Single Session With 'S...
Young Leukemia Patients With Native American Ancestry At Hi... >>