Digging Out a New Morbid Career at Germany's 'funeral School' 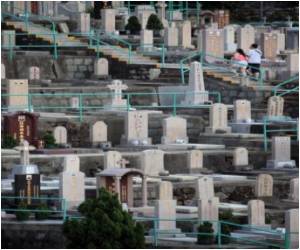 Trainee German undertakers are being put through their paces at Europe's only "funeral school" -- anything but a dying business in the fast-ageing continent.

When Arzu Gahramanov's father-in-law died, his family not only ended up in grieving over a lost one but also ended up in debt over the lavish expenses of the mourning ceremony.
Advertisement

In addition to learning how to dig a grave, students are taught how to deal with grieving families, how to cement a vault properly, how to prepare bodies for the funeral, and even how to write out death notices.


"We often have foreigners contacting us. We've even had groups from China and Russia looking into our methods of training," Rosina Eckert, who heads the school's administrative centre, told AFP.

In bizarre news, a Brazilian woman, who was declared dead at a hospital woke up in a funeral parlour hours before she was to be buried.
Advertisement
"Some people wondered how I got into this," says 26-year-old Lisa Magera as she works up a sweat digging a grave from the frozen earth in the school's mock cemetery.

"Before I worked as an assistant nurse," says Magera, one of 525 apprentices at the school which bills itself as the only one of its kind in Europe.

"When someone died, I was always keen to see what the funeral parlour people did when they came to pick up the corpse. I found it interesting," she added.

Next to the mock grave she is digging lies a grey marble headstone to honour the memory of one "August Weisheit, 1878-1961, beloved husband and dear father". But there are no flowers and no body for this make-believe burial.

"I wanted to do something involving people rather than just sitting all day long in an office", she said.

Trainer Wilhelm Lautenbach, who travels to teach here from his northern home town of Hanover, acknowledges that the trade used to be one that got handed down from father to son.

His own firm was set up in 1896 and he hopes his son, Malte, will one day take over.

"But changes are taking place" and more and more people from different backgrounds are drawn to this near recession-proof job, he says.

Funeral costs in Germany vary greatly, but a consumer association has calculated that the average price of dying lies between 2,000 and 5,000 euros (2,700 to 6,900 dollars).

According to official German statistics, there were 8.1 births per 1,000 people compared to 10.4 deaths per 1,000 in 2009, a "greying" trend shared by most other European countries

Death "is more and more talked about. And one spends ever more time thinking of the fact that there's death after life," says Lautenbach.

"The most difficult thing in this job is satisfying the dead person's relatives. But that's also what makes it most interesting", says 24-year-old Christian Richter as he hammers metal handles into a coffin.

"You've got to take great care in making sure the padding is well stapled into the corners of the coffin," says Sven Schroeder, another trainer, as he bends over Richter's work, minutely checking all the details.

In addition to a workshop, the school also has a "hygiene room" where students learn how to wash and embalm dead bodies, allowing them to be preserved over several days.

Dealing with dead bodies? "It's all part of the job," says Magera.

"Of course, at first it's a little strange ... but you take it step by step and get used to it," she adds.

Would-be undertakers "train" with people who have given their bodies to science. The school also houses a chapel, fully equipped with pews and artificial wreaths to allow mock funeral services to be held.

And the school library offers a large amount of specialised material from the "dictionary of funeral services", to "the psychology of grieving", and a raft of marketing books including one titled: "He who doesn't advertise dies!"

The key to it all? "Know how to be compassionate while keeping your distance," says Magera.

Funeral industry workers are at a greater risk of getting leukemia because they are exposed to formaldehyde for long durations, a new study has claimed.
Advertisement
Advertisement
This site uses cookies to deliver our services.By using our site, you acknowledge that you have read and understand our Cookie Policy, Privacy Policy, and our Terms of Use  Ok, Got it. Close
×