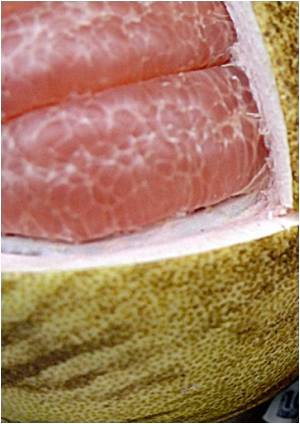 A new study has found grapefruit could hold the key to tackling diabetes.

Naringenin, an antioxidant derived from the bitter flavor of grapefruits and other citrus fruits, may cause the liver to break down fat while increasing insulin sensitivity, a process that naturally occurs during long periods of fasting.


Scientists from the Hebrew University of Jerusalem and Massachusetts General Hospital (MGH) report that naringenin activates a family of small proteins, called nuclear receptors, causing the liver to break down fatty acids.


In fact, the compound seems to mimic the actions of other drugs, such as the lipid-lowering Fenofibrate and the anti-diabetic Rosiglitazone, offering the advantages of both.

If the results of this study extend to human patients, this dietary supplement could become a staple in the treatment of hyperlipidemia, type-2 diabetes, and perhaps metabolic syndrome.

"It is a fascinating find. We show the mechanism by which naringenin increases two important pharmaceutical targets, PPARa and PPAR?, while blocking a third, LXRa. The results are similar to those induced by long periods of fasting," said Yaakov Nahmias, of the Hebrew University of Jerusalem the paper's senior author.

The report appears in this week issue of the online journal PLoS ONE.