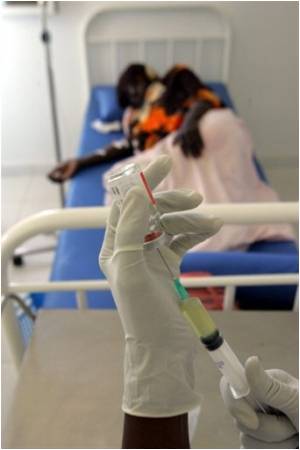 Research has revealed that the potentially deadly bacterium Salmonella possesses a molecular machine that marshals the proteins it needs to hijack cellular mechanisms and infect millions worldwide.

In a paper published Feb. 3 online in Science Express, Yale University researchers describe in detail how Salmonella, a major cause of food poisoning and typhoid fever, is able to make these proteins line in up in just the right sequence to invade host cells.


Galan's lab has been in the forefront of investigating the intricate mechanisms that microbes such as Salmonella use to infect foreign cells. In the new study, Galan and colleagues identify what they call a bacterial sorting platform, which attracts needed proteins and lines them up in a specific order. If the proteins do not line up properly, Salmonella, as well as many other bacterial pathogens, cannot "inject" them into host cells to commandeer host cell functions, the lab has found.

Bacterial infection of urinary bladder can cause pain and burning sensation while passing urine. Abnormal Vesico-ureteric reflex, due to which the urine goes back to the kidneys from the bladder is also known to cause infection.
Advertisement
Understanding how this machine works raises the possibility that new therapies can be developed which disable this protein delivery machine and therefore thwart the ability of the bacterium to become pathogenic. This process would not kill the bacteria as most antibiotics do, but would cripple its ability to do harm.

In theory, this means that bacteria such as Salmonella might not develop resistance to new therapies as quickly as they usually do to conventional antibiotics.

Salmonella sickens at least 40,000 people annually in the United States and kills about 400 people, according to the Centers for Disease Control.

Typhoid is a bacterial infection affecting the gastrointestinal tract including several the liver, spleen and ...

Consuming foods that have been contaminated with pathogens such as E.coli, Salmonella or Campylobacter, can ...